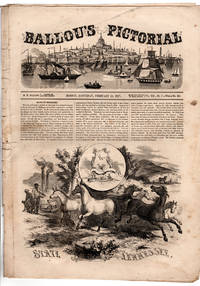 by Ballou, Maturin M. and Durivage, Francis A. [Editors]

Boston: Ballou, M.M., 1857. First Edition . Soft cover. Very Good. Elephant Folio - over 15" - 23" tall. From Engravings. Very Good. Boston: M.M. Ballou, 1857. The February 14, 1857 issue, Volume XII, No.7, Whole No. 295. Numerous illustrations from engravings. Expansive Elephant folio size, sewn newsprint wraps, 16 pp. Very Good; notable edge tatter at front cover and spine; the rest of this issue shows virtually no flaws at all but for a very modest amount of age-toning. See scans. A sturdy example. Maturin Ballou's paper was quite supple, not at all fragile, and it shows. Sharp, healthy, well-preserved. This issue contains stories, articles, and / or the diverse and now somewhat legendary engravings. Here, there are 18 sizable engraving. They include the masthead, a busy Boston Harbor engraving; a front-page State of Tennessee engraving; eight engravings of birds - Rupicola Aurantia, the Umbrella Bird, the Fantail Warbler, the Chinese Teal, the Emeu (Emu), the Loxia Bengalenses, the Tailor Bird, and the Puffin; four large, beautiful Canadian landscape engravings, including an Ottawa Falls, the Falls of the Chaudiere (Quebec), Murray Bay, and Cape Trinity; a Sigismund Thalberg portrait; Skaters on Jamaica Pond (Boston); a statue of Nicholas Poussin; and a scene, "Domestic Service to an Eastern Rajah and Princess. Most of the non-fiction articles relate to these illustrations, plus a few have no illustrations (How Murat Died, The Worth of a Valet, The Education of the Eye, e.g.). The fiction offerings include "The Spanish Moor, or The Convent of Alcala" (Eugene Scribe), 3 chapters; "The Pawnbroker's Christmas" (Richard Cranshaw); "The Bride and the BOttle, or The Well of St. Keyne" (Emily R. Page); snd "The Election Ruse", by William O. Eaton. Several period poems, as always, too. Maturin Ballou's 16-page newsprint periodical was already a piece of American history when he, as managing editor of Gleason's Pictorial, bought that - the first successful illustrated weekly newspaper in America - from owner Frederick Gleason in 1855. This issue is thus a fairly early one, under Ballou's editorship and his management. See scans. LLng3

folio
A folio usually indicates a large book size of 15" in height or larger when used in the context of a book description....[more]
First Edition
In book collecting, the first edition is the earliest published form of a book. A book may have more than one first edition in...[more]