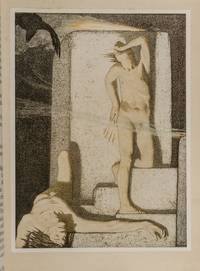 Book of Genesis, The

Book of Genesis, The

"Nearer to the private press style and better known are the books from Philip Lee Warner at the Riccardi Press and Chatto and Windus's Florence Press. They were not strictly private presses, but very near in heritage and example. Types for both were designed by Herbert Horn...and cut by Edward Prince. Both these typefaces have a clear and rational beauty, more economic in use than the Doves type but based upon the same models. Most of the Riccardi books were printed by Jacobi at the Chiswick Press" (Franklin, The Private Presses, p. 160).

"Mr Horne also designed a similar type for the Riccardi Press, who se first book appeared in 1909. The title was assumed by the Medici Society for books 'to be finely printed and issued at reasonable prices through the usual trade channels.' The books were primarily vehicles for coloured illustrations reproduced by the Medici Process, by which a large number of single prints had already been made, but the program was soon extended...Composition and presswork were done at the Chiswick Press under the personal supervision of Mr. Charles T. Jacobi until his retirement in 1922. Texts were chiefly of familiar classics and many were illustrated by contemporary artists" (Ransom, p. 164-65).

F[rederick] Cayley Robinson (1862-1927) was an English painter, decorator and illustrator. Born in Brentford, Cayley Robinson was the son of a stockbroker and studied at St John's Wood Academy, the Royal Academy Schools and at the AcadÃ©mie Julian in Paris from 1890 to 1892. He was a member of the Society of Painters in Tempera, the New English Art Club and the Royal Watercolour Society. He regularly exhibited at the Royal Academy and the Society of British Painters. In 2010 the National Gallery put on an exhibition in the Sunley Room showing six works by Cayley Robinson The exhibition ran from 14 July to 17 October.

"The look of Cayley Robinson's paintings, so distinctive, so clear, turns out to be much more than a synthesis of past art. It is precisely what allows subversion to hide in plain sight" (Review of National Gallery exhibition, The Guardian, July 24, 2010).

raised band(s)
Raised bands refer to the ridges that protrude slightly from the spine on leather bound books.  The bands are created...[more]
morocco
Morocco is a style of leather book binding that is usually made with goatskin, as it is durable and easy to dye. (see also...[more]
Cloth
"Cloth-bound" generally refers to a hardcover book with cloth covering the outside of the book covers. The cloth is stretched...[more]
paste-down
The paste-down is the portion of the endpaper that is glued to the inner boards of a hardback book. The paste-down forms an...[more]
spine
The outer portion of a book which covers the actual binding. The spine usually faces outward when a book is placed on a shelf....[more]
quarto
The term quarto is used to describe a page or book size. A printed sheet is made with four pages of text on each side, and the...[more]
New
A new book is a book previously not circulated to a buyer. Although a new book is typically free of any faults or defects,...[more]
gilt
The decorative application of gold or gold coloring to a portion of a book on the spine, edges of the text block, or an inlay in...[more]
fine
A book in fine condition exhibits no flaws. A fine condition book closely approaches As New condition, but may lack the...[more]