Home Capricorn Books CHILDREN OF THE BENARES: A WAR CRIME AND ITS VICTIMS. 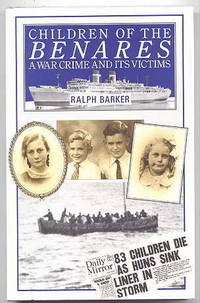 CHILDREN OF THE BENARES: A WAR CRIME AND ITS VICTIMS.

CHILDREN OF THE BENARES: A WAR CRIME AND ITS VICTIMS.

London: Methuen, 1987. 172 pp, 8vo (8 3/4" H). B&w photographs. "When the passenger liner 'City of Benares' sailed from Liverpool on Friday, 13 September 1940 she was carrying 90 evacuee children from the bombed cities of Britain, bound under a government-sponsored scheme for a safe haven in Canada. Her sinking by U-boat four days later, without warning, in total disregard of the plight of survivors and in defiance of international law, shocked and horrified the civilised world. Of 406 people on board 256 were lost - including, at first count, 83 of the evacuee children. In Britain and the Commonwealth the reaction was one of righteous indignation, accompanied by an intense desire for retribution. Nor was the propaganda value neglected, a broadcast by King George VI the day after the news broke being clearly directed at neutral America. 'The world,' he said, 'could have no clearer proof of the wickedness against which we fight than this foul deed'. Suspicions subsequently arose, however, that the British authorities had quite as much to answer for as the Nazis. Parents who, despite many misgivings, had entrusted their children to the scheme when invasion threatened, began to ask questions when they learned that the promised naval escort had abandoned the convoy twenty-one hours before the 'Benares' was sunk. Allegations that crew members rushed the boats, that emergency equipment had failed, and that the whole voyage had been undertaken under the blight of racial prejudice, demanded a formal investigation. But somehow this was avoided, and the scandal was successfully hushed up. Ralph Barker, after a vivid and poignant reconstruction of the disaster, turns his attention to what really happened behind the scenes at the Admiralty and the Ministry of Shipping. The result is a harrowing story of human fallibility and human survival." Light to moderate browning to pages and edges of text block, minor wrinkling at top/bottom of spine. Dust jacket has two areas of light edge wrinkling.. First Edition.. Hard Cover. Very Good-/Very Good.

We accept the following forms of payment:

VISA & MASTERCARD [If contacting us directly by email please ensure you provide the \'FULL NAME\' as it appears on your card, 4 digit expiry date, the full number on card, and the 3 or 4 digit CVV security on the back of the card]; Personal, Business or Cashiers Check; International Money Order or PayPal (PayPal e-mail is capricornbks@sympatico.ca) (Sorry, we are not able to process other credit cards directly at this time). Canadian residents will be charged 5% GST on converted amount.

SHIPPING: Shipping rates are based upon the weight of a standard size book (8vo) or a large format trade paperback up to 1kg (2.2lbs). Larger, heavier books will be shipped at cost. We will e-mail you a quote for your approval, before we ship. Mass market paperback books, in many cases, will cost less to ship to the U.S.A. and Internationally. We will inform you by e-mail or adjust the charge when we process your order.

RETURNS: Books may be returned if not as described within 10 days with prior notice. Please e-mail us prior to returning book - thank you.

Seller rating:
This seller has earned a 5 of 5 Stars rating from Biblio customers.
Biblio.com member since 2003
Oakville, Ontario
Ask Seller a Question

Welcome to Capricorn Books. We offer a wide range of used, out-of-print and antiquarian books in most subjects, for readers and collectors alike. Our business opened in 1995, and has been selling on the internet since 1999. We have a general stock with larger catalogues being History & Travel, Military History, Children's, Art & Antiques and Canadiana. All orders are processed promptly. Our goal is to ship your book(s) within 24 hours and notify you when we have done so - we always try to keep you informed. Enjoy your visit!

text block
Most simply the inside pages of a book. More precisely, the block of paper formed by the cut and stacked pages of a book.... [More]
edges
The collective of the top, fore and bottom edges of the text block of the book, being that part of the edges of the pages of a... [More]
spine
The outer portion of a book which covers the actual binding. The spine usually faces outward when a book is placed on a shelf.... [More]
jacket
Sometimes used as another term for dust jacket, a protective and often decorative wrapper, usually made of paper which wraps... [More]
First Edition
In book collecting, the first edition is the earliest published form of a book. A book may have more than one first edition in... [More]