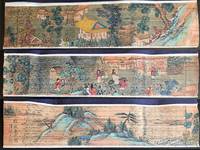 Chinese Fore-Edge Painting with scenes from the New Testament [Bible].

Chinese Fore-Edge Painting with scenes from the New Testament [Bible].

Hong Kong,: 1553-1588., 1553. 3 volumes. Tall [6.5x10.5 inches]. 'Hsiao Hs?ch Kan Chu' Vols., 7-8. (Chinese Encyclopedia of Unprofitable Learning]. Written by Wang Ying-Lin (Po Hou) (1223-1275 A.D.). Edited in [the] 32th [sic] year, 36th year of Chia Ching, 11th year, 12th year, 15th, 16th year of Wandi, Ming dynasty (1553, 1557, 1583, 1584, 1587, 1588, A.D.), an additional edition of Yu Hai. Paper uniformly browned. Contents: [I]: Family and clan, officers + the way of governing the country. [II]: Literary pursuits, Famous Ministers, Famous Generals, Sages, and worthies, etc. [III]: National regulations, utensils and plants and animals. Each part bound in colored wrappers and placed within a single folding interlocking "brocade" case. RARE. VERY CHOICE CHINESE FORE-EDGE PAINTING with a triptych-scene showing Jesus entering into Jerusalem, signed by the artist. The scenes are meant to align together as a continuous painted scene. This is the only known Chinese fore-edge specimen that was painted as a continuous 3-part panorama scene. Most Chinese fore-edge paintings are not signed, thus this one with the signature and stamp is notable. / Fore-edge Painting: 3 volumes, painted like a long scroll showing Jesus's Entry into Jerusalem. With signature and seals of the artist, Lu Hung Nien. / The first Chinese fore-edge paintings were commissioned by Dr. William B. Pettus (1880-1959). He was a visiting scholar in Hong Kong, president of the College of Chinese Studies in Peiping (Beijing), China, and member of the Zamorano Club of book collectors. He commissioned maybe upwards of 200 specimens, of which only a sparse record of there being is recorded (71 are located by Jeff Weber). Some went to the Estelle Doheny collection. Noting that Pettus died in 1959 and this was sold in early 1960 it could be that this specimen was kept by Pettus and then after his death to was offered to Dawson's. PROVENANCE: Painted circa. 1935-9 [ownership: Dr. William B. Pettus] - Dawson's Book Shop, Los Angeles, Catalogue 313, item 48 [Jan. 1960] - Phoebe Jane Easton & family - Jeff Weber.

Seller rating:
This seller has earned a 5 of 5 Stars rating from Biblio customers.
Biblio.com member since: 2006
Carlsbad, California
Ask Seller a Question

Visitors are welcome to the shop. Call ahead for an appointment if you wish to meet with me. On display are about 12,000 books.

wrappers
The paper covering on the outside of a paperback.  Also see the entry for pictorial wraps, color illustrated coverings for...[more]