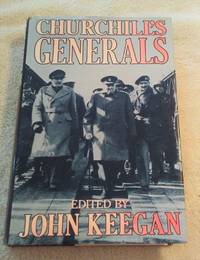 This is a first edition of Churchill's Generals, edited by the English military historian John Keegan (1934-2012), and British soldier and fellow adventurer Michael Alexander (1920-2004). This is one of the original copies, from the UK print run.

It is a unique collection of essays by eminent historians. Churchill's reputation as Prime Minister during World War II fluctuated according to the successes and failures of his generals. Most were household namesâ€”even heroes. Yet all were prey to the intolerance, interference, irascibility, and inspiration of Britain's leader, who wanted to be both the general in the field and the presiding strategic genius. Yet, despite sacking his warlords ruthlessly, in the end Churchill was served by perhaps the greatest generals England has ever produced. The chapters cover such outstanding military men as Wavell, Ironside, Ritchie, Auchinleck, Montgomery, Alexander, Percival, Wingate, and Carton de Wiart.

This copy is in excellent condition. The front endpaper carries an attractive dedication--it was a gift from daughter to father. It has 2 dogears. Other than that, it's perfect.
Unclipped dust jacket. 368 pages, including photographs.