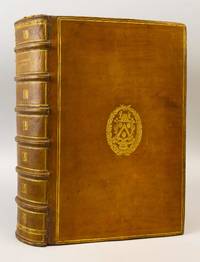 by (BINDINGS - DE THOU). DEMOSTHENES

Basileae: Ex officina Heruagiana, per Eusebium Episcopium, 1572. 385 x 250 mm. (15 1/4 x 10"). 18 p.l., 744 pp., [16] leaves; 368 pp.; 218 pp., [13] leaves.Edited by Hieronymus Wolf and Vincentius Opsopäus. IMPOSING CONTEMPORARY CALF, COVERS WITH GILT FRENCH FILLET BORDER, CENTRAL COAT OF ARMS OF JACQUES AUGUSTE DE THOU (as a bachelor) within a laurel wreath, raised bands, spine gilt in double-ruled compartments with de Thou's cipher at center (older repairs to front joint and to two-inch tear on front cover). Printer's device on title and final pages. Dibdin I, 478. Front joint with three-inch crack at tail, a little fraying at head of spine, a few minor marks to cover, but the binding still sturdy, the leather lustrous, and the gilt bright. Leaves a shade less than bright (due to paper quality), with a dozen or so quires a little browned, isolated paper defects to margins, additional trivial imperfections, otherwise a fine copy internally, clean and fresh with comfortable margins. This Latin and Greek edition of the works of Demosthenes and Aeschines, fourth century B.C. Greek orators and rivals, comes from the illustrious collection of French historian, bibliophile, and statesman Jacques-Auguste de Thou, who assembled one of the greatest libraries of his day. Our binding bears the arms and cipher used by de Thou as a bachelor; after his marriage in 1587, he combined his arms with those of his wife in his supralibros and incorporated her initials in the cipher. Demosthenes (384-322 B.C.) was as famous an orator in the ancient world as Homer was a poet, and though he wrote no books, his many speeches had considerable political importance in his time, were recorded and collected, and have been much analyzed by generations of students of language and rhetoric. Often printed, as here, with the works of Demosthenes were the three extant orations of Aeschines (ca. 390-314 B.C.). He was the arch-enemy of Demosthenes, and one can see in Aeschines' public life and orations a concerted attempt to discomfit his rival. In his oration "Against Ctesiphon," for example, Aeschines argues that a crown intended for Demosthenes to honor his services to Athens ought not to be awarded. As an orator, he was possessed of a learned and impassioned eloquence, but, in comparison with Demosthenes, he lacked taste, judgment, and moral authority. A pupil of Melanchthon and a major scholar of the period, Hieronymus Wolf (1516-80) came to prominence, according to Sandys, with his editions of Suidas, of Isocrates (beginning in 1570), and of Demosthenes. For the text here, he relied on a manuscript in the Augsburg Library, the codex Augustanus primus. Jacques-Auguste de Thou (1553-1617) served French kings Henri III and Henri IV, negotiated the Edict of Nantes (one of the earliest decrees of religious tolerance in Europe), and produced a history of contemporary France noted by modern historians for its scientific and detached approach, but condemned in his day for its objective view of Protestantism. A devoted bibliophile and scholar, he amassed a library of more than 9,000 volumes by the time of his death. Bindings from his collection continue to be very actively sought after.

fine
A book in fine condition exhibits no flaws. A fine condition book closely approaches As New condition, but may lack the...[more]
gilt
The decorative application of gold or gold coloring to a portion of a book on the spine, edges of the text block, or an inlay in...[more]
raised band(s)
Raised bands refer to the ridges that protrude slightly from the spine on leather bound books.  The bands are created...[more]
calf
Calf or calf hide is a common form of leather binding.  Calf binding is naturally a light brown but there are ways to treat...[more]
tail
The heel of the spine.
device
Especially for older books, a printer's device refers to an identifying mark, also sometimes called a printer's mark, on the...[more]
leaves
Very generally, "leaves" refers to the pages of a book, as in the common phrase, "loose-leaf pages." A leaf is a single sheet...[more]