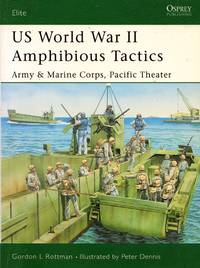 Botley, Oxford, UK: Osprey Publishing, 2004. 64 Pages with Black/White Photos and Colour Plates. The US armed forces were responsible for many tactical innovations during the years 1941-45, but in no field was US mastery more complete than amphibious warfare. In the vast, almost empty battlefield of the Pacific the US Navy and Marine Corps were obliged to develop every aspect of the amphibious assault landing in painstaking detail, from the design of many new types of vessel, down to the tactics of the rifle platoon hitting the beach, and the logistic system without which they could not have fought their way inland. This fascinating study offers a clear, succinct explanation of every phase of these operations as they evolved during the war years, illustrated with detailed color plates and photographs. . First Edition. Soft Cover. Good/No Jacket. Illus. by Dennis, Peter.

jacket
Sometimes used as another term for dust jacket, a protective and often decorative wrapper, usually made of paper which wraps...[more]
New
A new book is a book previously not circulated to a buyer. Although a new book is typically free of any faults or defects,...[more]
First Edition
In book collecting, the first edition is the earliest published form of a book. A book may have more than one first edition in...[more]