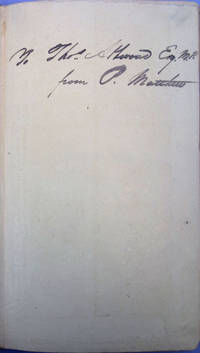 This plan for British emigration to North America, Africa, Australia and New Zealand was informed by Matthew's ideas on natural selection, which he first expressed in 1831, fully anticipating Darwin. Matthew speculates on the influence of environmental conditions, for example in southern Africa, where he predicts that the native population, perfectly adapted to the climate, and now governed by a more humane colonial policy, will grow at a faster rate than the colonial population.

Matthew presented this copy to the social reformer and M. P. Thomas Attwood, who presented the Chartists' petition for universal suffrage and other democratic rights to the House of Commons in June of 1839 (see DNB).This is the only book inscribed by Patrick Matthew that we have seen on the market in more than 40 years.During the same period we have never seen an autograph letter by Matthew for sale. Thus is an extremely opportunity to obrtain Patrick Matthew's autograph, etc.

Seller rating:
This seller has earned a 5 of 5 Stars rating from Biblio customers.
Biblio.com member since: 2009
Novato, California
Ask Seller a Question

We are open during normal business hours Monday through Friday, by appointment only.

Cloth
"Cloth-bound" generally refers to a hardcover book with cloth covering the outside of the book covers. The cloth is stretched...[more]
gilt
The decorative application of gold or gold coloring to a portion of a book on the spine, edges of the text block, or an inlay in...[more]
rebacked
having had the material covering the spine replaced. ...[more]
New
A new book is a book previously not circulated to a buyer. Although a new book is typically free of any faults or defects,...[more]
12mo
A duodecimo is a book approximately 7 by 4.5 inches in size, or similar in size to a contemporary mass market paperback....[more]
inscribed
When a book is described as being inscribed, it indicates that a short note written by the author or a previous owner has...[more]