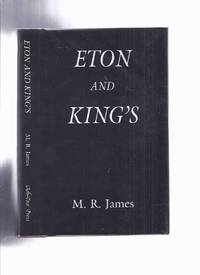 British Columbia: Ashcroft, BC (previously Pennyffordd. Chester, UK ): Ash Tree Press / AshTree, 2005, 1st Ash Tree Edition, First Printing, 2005. ----------hardcover, a Fine copy in a Fine dustjacket, 200 pages ---First published in 1926, and never reprinted, Eton and King's, M. R. James's recollections of his time spent in the Colleges founded by King Henry the Sixth, is the only autobiographical volume bequeathed to us by the highly regarded scholar and antiquarian -the man known to us as the Master of the English Ghost Story. --Displaying the wry humour so evident in his fiction, James fills the pages of Eton and King's with a lovingly detailed portrait of the artist as a younger man, discussing the people and experiences which were to influence his later life - including A. C. & E. F. Benson, E. G. Swain, James McBryde, and most notably 'my Tutor', H. E. Luxmoore. James reveals his deep affection for the venerable institutions of Eton and King's College, guiding the reader through many of their unique customs and practices. --While Eton and King's is somewhat less than a traditional autobiographical study, the book does reveal some of James's beliefs, interests, and way of thinking, all of which found expression, to some extent, in his ghost stories. We also learn, somewhat surprisingly, of MRJ the sportsman -his involvement in the Wall Game at Eton, and his occasional outings on the cricket field. More especially, we experience James's Continental trips -to Germany, Scandinavia, and, particularly, to his beloved France -undertaken in the company of College friends and associates. --The Chitchat Society, which witnessed the reading of the first of MRJ's ghost stories, also puts in an appearance when James discusses the life and workings of various College societies with which he was involved; and finally MRJ guides us through his work with manuscripts and his duties as Provost. --This new edition of Eton and King's has been fully indexed by Rosemary and Darroll Pardoe, who have also provided an Introduction. A further article 'New and Old at Cambridge', which MRJ contributed to The Times, is also included as an appendix, any image directly beside this listing is the actual book and not a generic photo ///NOT SIGNED---GUARANTEED to be AVAILABLE ///. First Edition. Hard Cover. Fine (see description)/Fine (see description). Illus. by Text Cover. NOT Price Clipped .

fine
A book in fine condition exhibits no flaws. A fine condition book closely approaches As New condition, but may lack the...[more]
First Edition
In book collecting, the first edition is the earliest published form of a book. A book may have more than one first edition in...[more]
New
A new book is a book previously not circulated to a buyer. Although a new book is typically free of any faults or defects,...[more]
price clipped
When a book is described as price-clipped, it indicates that the portion of the dust jacket flap that has the publisher's...[more]
G
Good describes the average used and worn book that has all pages or leaves present. Any defects must be noted. (as defined...[more]