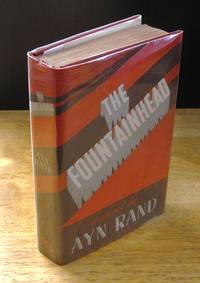 Indianapolis - New York: The Bobbs-Merrill Company, 1943. Stated at copyright: First Edition. Maroon (dark red) full-cloth boards, gilt cover and spine titles, varying spine wear, crease, rub, bump. Pages very good; no writing. Bind good, moderate offset; hinges intact. Presented and preserved in an original second state wrapper of the first edition. Dust wrapper w/moderate shelf wear, rub; unclipped 3.00, protected in fine clear sleeve. Larger 6" x 8 3/4" design. Rare near very good first printing in same wrapper. Accompanying this first edition is a signed Ayn Rand letter dated June 5, 1946 in reference to the The Fountainhead motion picture in pre-production, written and hand signed: "Ayn Rand". Typed on original stationery with Hal Wallis Productions at Paramount Studios letterhead, the message conveys to Miss Nickie Tipps, apparently an executive, that Rand is happy that both the novel and the screenplay also composed by Rand, are both well liked. Letter has been folded in three. Finally, included in this collection is the rare booklet entitled: "A Letter from Ayn Rand, Author of The Fountainhead". Moderate shelf wear, upper edge discoloration; saddle-stitch bind, fine. Issued by Bobbs-Merrill in response to the deluge of requests for details about the novel and its author. Rand addresses readers and interested parties on her motivation and intent in writing this intriguing novel of philosophical fiction. The Fountainhead is an unprecedented phenomenon in modern literature. Arguably the century's most challenging novel of ideas; when first published it created a public furor and worldwide interest in Ayn Rand. On the surface, it is the story of a gifted young architect, his violent battle with conventional standards, and his explosive love affair with the beautiful woman who struggles to defeat him. In his fight for success, he first discovers and then rejects the seductive power of fame and money, finding that individual integrity must ultimately triumph. The story addresses a number of universal themes: the strength of the creative soul, the tug between good and evil, the threat of fascism, whether overt or hidden. The confrontation of these themes, along with the amazing stroke of Rand's writing, combine to give this creative classic its enduring influence. More relevant today than when written. 754 pages. Insured post.. Signed by Author. First Edition. Hardcover. Good/Good. 8vo - over 7¾" - 9¾" tall. Book.

fine
A book in fine condition exhibits no flaws. A fine condition book closely approaches As New condition, but may lack the... [More]
gilt
The decorative application of gold or gold coloring to a portion of a book on the spine, edges of the text block, or an inlay in... [More]
second state
used in book collecting to refer to a first edition, but after some change has been made in the printing, such as a correction,... [More]
First Edition
In book collecting, the first edition is the earliest published form of a book. A book may have more than one first edition in... [More]
spine
The outer portion of a book which covers the actual binding. The spine usually faces outward when a book is placed on a shelf.... [More]
shelf wear
Shelf wear (shelfwear) describes damage caused over time to a book by placing and removing a book from a shelf. This damage is... [More]
New
A new book is a book previously not circulated to a buyer. Although a new book is typically free of any faults or defects,... [More]