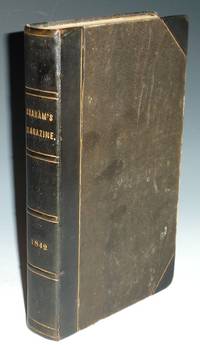 by Poe, Edgar A

Philadelphia, Vol. XX, January to June: George R. Graham, 1842. Large Octavo. Sammelband of three magazines illustrated with a couple hand-colored and several black & white engravings and one pattern. Graham's Magazine (as noted above); The New Mirror- June 17, 1843, Aug. 26, 1843, July 6, 1844 and Aug. 12, 1843. and extracts from The Rover, nd. but one from Vol. I, No. VII and Volume III, No. 16, [A Weekly magazine edited by Seba Smith, New York, S.B. Dean & Co. 1844] Poe was employed over the years by several magazines in some editorial capacity. As an editor, and sometimes merely as a regular contributor. Poe wrote a great deal of material in the form of literary reviews such as Review of Rufus W. Griswold's The Poets and Poetry of America, Review of [William Gilmore Simms's] Beauchampe, or the Kentucky Tragedy. Review of Nathaniel Hawthorne's Twice-Told Tales and Review of C[harles]. F[enno] Hoffman's The Vigil of Faith, and Other Poems, all found on pages 298-300 and attributed to [Edgar A. Poe], Table of Contents (genre)and notices, miscellaneous essays, editorial filler and even plate articles. Poe's stories found in these magazines would be considered first appearances of his works. Contained here within are the following titles by Poe: An Appendix of Autographs; A Few Works About Brainard; Life in Death; The Mask of Red Death and To One Departed. Bound in 3/4 black morocco over patterned cloth, raised bands ruled in gilt, lettering gilt, wear to corners and edges, light scattered foxing or staining. This issue of Graham's was Poe's last as editor. All magazines were serialized and first issued in wraps. Owners would have them bound later. To find any of Poe's works in wraps are quite rare. A very nice copy.

Seller rating:
This seller has earned a 5 of 5 Stars rating from Biblio customers.
Biblio.com member since: 2006
Scottsdale, Arizona
Ask Seller a Question

Cloth
"Cloth-bound" generally refers to a hardcover book with cloth covering the outside of the book covers. The cloth is stretched...[more]
morocco
Morocco is a style of leather book binding that is usually made with goatskin, as it is durable and easy to dye. (see also...[more]
edges
The collective of the top, fore and bottom edges of the text block of the book, being that part of the edges of the pages of a...[more]
gilt
The decorative application of gold or gold coloring to a portion of a book on the spine, edges of the text block, or an inlay in...[more]
New
A new book is a book previously not circulated to a buyer. Although a new book is typically free of any faults or defects,...[more]
raised band(s)
Raised bands refer to the ridges that protrude slightly from the spine on leather bound books.  The bands are created...[more]
octavo
Another of the terms referring to page or book size, octavo refers to a standard printer's sheet folded four times, producing...[more]
nd
no publisher's date given
plate
Full page illustration or photograph. Plates are printed separately from the text of the book, and bound in at production. I.e.,...[more]