Home Hyraxia Gulliver and Munchaussen Outdone: A Truth to Try the… 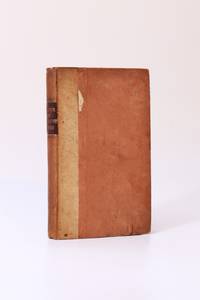 Gulliver and Munchaussen Outdone: A Truth to Try the Patience of a Stoick

Gulliver and Munchaussen Outdone: A Truth to Try the Patience of a Stoick

London: Jordan & Maxwell. London, Jordan & Maxwell, 1807. First Edition. First Impression. Hardback. Very uncommon. Pink paper boards with spine label. Interplanetary adventure. Preceding Frankenstein in its use of galvanisation for genesis. Though let's not get carried away. Where Shelley speculated on the use of electricity to reanimate a re-joined corpse, Vandergoose moulds golems from the wax of a giant bee (which had just fought a giant bear). If you're wondering what the protagonist-narrator did with the bee's honey.filled a lake with it, made that lake water super-tasty and downed the lot. So, Shelley's science wasn't on par with Alessandro Volta, but Vandergoose's was basically about one ppm science. Actually, I'm being very unfair, there is science in the book, and all that facetiousness apart, there are some very interesting bits, that I believe warrant academic investigation. Thankfully, there's more of the Munchaussen than the Gulliver. I quote "Reflecting upon the nature of the heat with which Prometheus imparted life and animation to his figures; I had no doubt but that it was produced by Galvanism: a secret known perhaps, in those times, to none but himself. Sensible by experience of its efficacious power, I proceeded to construct a Galvanic battery. By means of two different fluids and a piece of iron, it was soon formed. I then left it awhile to charge itself. In the mean time, I launched into an ocean of reflections, and indulged myself to the utmost in speculations upon futurity" (almost certainly the first reference to naval contemplation whilst awaiting the ponderous charging off a battery; c.f. every teenager once their phone battery drops below 1%). Now, don't assume silly 21st century reader of fiction, that we're excused from our protagonist-narrator's musing, indeed not. We get to revel in his peregrinations around the moral and ethical implications of a pawn-broker's usuriousness against his client, who just happened to be a Jew, who in turn lays an (unspecified) snare to "impiously" capture the pawn-broker (long story short: impossible situation because of regulation in the pawn-broker world; thank goodness dear Vandergoose was so prescient and exactly 200 years later there was no global economic crisis due to stringent banking regulation). The diatribe meanders to consider "whether what was thus considered condemnable in a Jew, should be commended in those sacred societies who, actuated by the love of God, and by charity towards their brethren, have piously undertaken the glorious task of punishing the transgressions of mankind, and who, to do them justice, spare no pains, no cares, to keep the law employed." Alas, Vandergoose is not too succinct, but my reading of it suggests a firm 'no' on the matter (at least to our protagonist-narrator, I suspect though not perhaps to Vandergoose). We then move onto forgery and Russia "Immortal Catherine!", but, like a teenager distracted by a the ping of a new Insta-follower, our protagonist-narrator's Galvanic battery is fully 'impregnated' ('charged' seems so lacklustre by comparison) and the wool-gathering ceases. And so we head back to the Promethean fire: "By great good fortune [not Providence, God or Lachesis?] I happened to have a piece of wire of a considerable length in my pocket; and by means of it, I immediately brought all the figures in contact with the battery. The effect was instantaneous. Violent and distorted motions, winking, smelling, chewing, swallowing, kicking, smelling, chewing, and capering [capering! thank the pantheon that there was capering], were at once produced in all the figures. The sudden appearance of such hideous confusion, staggered all my philosophy. The next section a precis: the battery rests on a great quantity of metallic ore (heavily seamed with gold) which seems to run all the way to the forest and thus the forest is set alight (in all seriousness, this is a great early example of the unintended consequences of wild science). The fire melts . Good. Hardback. 1st Edition. 1st Printing. 1807.

spine label
The paper or leather descriptive tag attached to the spine of the book, most commonly providing the title and author of the...[more]
New
A new book is a book previously not circulated to a buyer. Although a new book is typically free of any faults or defects,...[more]
First Edition
In book collecting, the first edition is the earliest published form of a book. A book may have more than one first edition in...[more]