Home Morning Blue The History of the World, in Five Books 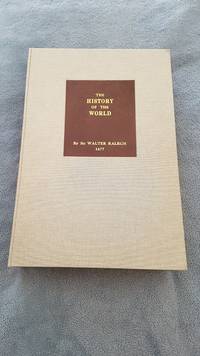 The History of the World, in Five Books

The History of the World, in Five Books: A 17th-century work attacking the Divine Right of Kings

Sir Walter Ralegh (more often spelled Raleigh nowadays), explorer, privateer, soldier, spy, poet and courtier, wrote this book while in the Tower of London, awaiting his execution, since he had violated King James's pardon for his previous errors as well as England's 1604 Treaty with Spain on a mad search for El Dorado, the fabled (and imaginary) City of Gold.This work was actually Ralegh's plea to King James I for yet one more royal pardon.

The History of the World contains Five Books:
The First, Intreating of the Beginning and first Ages of the same, from Creation unto Abraham.
The Second, Of the Times from the Birth of Abraham to the destruction of the Temple of Solomon.
The Third, From the Destruction of Jerusalem to the time of Philip of Macedon.
The Fourth, From the Reign of Philip of Macedon to the establishment of that Kingdom in the Race of Antigonus.
The Fifth, From the settled Rule of Alexander's Successours in the East, until the Romans (prevailing over all) made Conquest of Asia and Macedon.
Whereunto is added in the Edition, the Life and Tryal of the Author, London, printed for Robert White, T. Basset, J. Wright, R. Chiswell, G. Dawes and T. Sawbridge, 1677.
Thick folio; engraved frontispiece; pp. [46] (Mind of the Front, Title, Preface and Contents); pp. 1-44, 51-54 (Life and Tryal); pp. 1-10, 15-119, 118-[V126), 129-376, 292-480, 569-660, 577-708, 737-855, [1], [2], (To the Reader), [40] (Chronological and Alphabetical Tables); other minor pagination anomalies; 8 double-paged maps and plans (one of them showing the exact location of Earthly Paradise), and few textual woodcuts; wanting front. port, but with engraved title and the Mind of the Front; signatures variously in fours, sixes and twos; title in red and black; the work is printed in double columns, except for The Life of...[B-Ei]; recent full blind-stamped calf, new end papers, printed partially in Black Letter; few contemporary notations, and contemporary notes on verso of "Mind", first leaves chipped (nibbled? ) at bottom edge; some old damp-staining at upper portion of prelims; text age-browned; sporadic small chips or tears, and some sporadic stains. The collation here described is correct for this edition. Will be shipped in a handsome robust custom-made slipcase (see photo). Of particular interest is Ralegh's map showing the location of Earthly Paradise, next to Babylon (see photo). Given the weight (12 lbs.) and value of this book, it is not possible to ship it via Canada Post. I prefer shipping it via DHL, at buyer's expense. I will cover the insurance.
Wing R167; Sabin 67560n, vide Printing and the Mind of Man117: "... Raleigh's perception that geography, 'the knowledge of the places wherein history is performed' is fundamental to the right understanding of historical events." The book was written while the author was a prisoner in the Tower, and within its context he criticizes the philosophy of the Divine Right of Kings, as practiced in the Stuart line. "Sir Walter Raleigh or Ralegh can be taken as the epitome of the Elizabethan idea of the courtier and politician, sailor and explorer, writer and poet... He was among the first Englishmen to envisage clearly that the Americas should be the principal goal of English overseas expansion, the ultimate aim of which was to be the supersession of the Spanish by an English empire." -(PMM) First published in 1614, it was reprinted many times thereafter. The title page bears an inscription by Simon Segar, and his name is neatly written a second tie in the middle of the page. Simon Segar (fl. 1656-1712) was the great-grandson of Sir William Segar, king-of-arms and was, himself, a member of Gray's Inn. In the 1670s he was appointed second butler and library keeper, and was paid to set up the readers' coats-of-arms in the Library. - (DNB LI:198) Beineke Library at Yale holds some of his books.

Seller rating:
This seller has earned a 5 of 5 Stars rating from Biblio customers.
Biblio.com member since: 2020
Montreal, Quebec
Ask Seller a Question

leaves
Very generally, "leaves" refers to the pages of a book, as in the common phrase, "loose-leaf pages." A leaf is a single sheet...[more]
calf
Calf or calf hide is a common form of leather binding.  Calf binding is naturally a light brown but there are ways to treat...[more]
G
Good describes the average used and worn book that has all pages or leaves present. Any defects must be noted. (as defined...[more]
folio
A folio usually indicates a large book size of 15" in height or larger when used in the context of a book description....[more]
title page
A page at the front of a book which may contain the title of the book, any subtitles, the authors, contributors, editors, the...[more]
New
A new book is a book previously not circulated to a buyer. Although a new book is typically free of any faults or defects,...[more]
verso
The page bound on the left side of a book, opposite to the recto page.