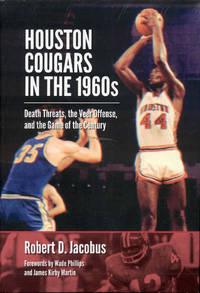 Houston Cougars in the 1960s: Death Threats, the Veer Offense, and the Game of the Century

Houston Cougars in the 1960s: Death Threats, the Veer Offense, and the Game of the Century

College Station, Texas: Texas A&M University Press, 2015. CD3 - A first edition (stated) hardcover book SIGNED and inscribed by author to previous owner on the half-title page in very good condition in good dust jacket that is mylar protected. Dust jacket has soiled patch lower front, some scattered wrinkling crease, and scratches, light discooration and shelf wear. Book has some bumped corners, light patch stain on the lower front, light discoloration and shelf wear. Foreword by Wade Phillips and James Kirby Martin. Swaim-Paup-Foran-Spirit of Sports Series, Sponsore by James C. '71 and Debra Parchman Swain, Nacny and T. Edgar Paup '74, and Joseph Wm. and Nancy Foran. Courageous players and coaches leading the struggle for racial equality in 1960s Houston... 9.5"x6.5", 366 pages. Satisfaction Guaranteed. On January 20, 1968, the University of Houston Cougars upset the UCLA Bruins, ending a 47-game winning streak. Billed as the "Game of the Century," the defeat of the UCLA hoopsters was witnessed by 52,693 fans and a national television audience - the first-ever regular-season game broadcast nationally. But the game would never have happened if Houston coach Guy Lewis had not recruited two young black men from Louisiana in 1964: Don Chaney and Elvin Hayes. Despite facing hostility both at home and on the road, Chaney and Hayes led the Cougars basketball team to 32 straight victories. Similarly in Cougar football, coach Bill Yeoman recruited Warren McVea in 1964, and by 1967 McVea had helped the Houston gridiron program lead the nation in total offense. Houston Cougars in the 1960s features the first-person accounts of the players, the coaches, and others involved in the integration of collegiate athletics in Houston, telling the gripping story of the visionary coaches, the courageous athletes, and the committed supporters who blazed a trail not only for athletic success but also for racial equality in 1960s Houston.. Signed by Author. First Edition. Hard Cover. Very Good/Good. 8vo - over 7¾" - 9¾" tall.

Bookmarc's has a 100% money back guarantee on books returned within 30 days of the date they are mailed to you and it is not as described.

Seller rating:
This seller has earned a 5 of 5 Stars rating from Biblio customers.
Biblio.com member since: 2005
La Porte, Texas
Ask Seller a Question

First Edition
In book collecting, the first edition is the earliest published form of a book. A book may have more than one first edition in...[more]
jacket
Sometimes used as another term for dust jacket, a protective and often decorative wrapper, usually made of paper which wraps...[more]
shelf wear
Shelf wear (shelfwear) describes damage caused over time to a book by placing and removing a book from a shelf. This damage is...[more]
soiled
Generally refers to minor discoloration or staining.
inscribed
When a book is described as being inscribed, it indicates that a short note written by the author or a previous owner has...[more]