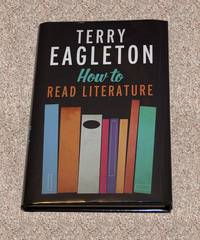 HOW TO READ LITERATURE

HOW TO READ LITERATURE

New Haven, CT: Yale University Press, 2013. First Edition. First Printing.. Hardcover. As New/As New Dust Jacket.. New Haven, CT: Yale University Press, 2013. Hardcover. As New/As New. First Edition/First Printing. 220 pages. Book-length account on subject. One of Terry Eagleton's best books. The First Hardcover Edition. Precedes and should not be confused with all other subsequent editions, particularly the Softcover Edition. Published in a small and limited first print run as a hardcover original by a University Press. Presents Terry Eagleton's "How to Read Literature". His "how-to-read" guide-cum-literary manifesto. "In a series of brilliant analyses, Eagleton shows how to read with due attention to tone, rhythm, texture, syntax, allusion, ambiguity, and other formal aspects of literary works. He also examines broader questions of character, plot, narrative, the creative imagination, the meaning of fictionality, and the tension between what works of literature say and what they show" (Publisher's blurb) . While Eagleton is inescapably identified with "theory", his reaching-out to a broader audience is proof, if proof were needed, that the latter is dying, if not dead, except, ironically enough, in the most provincial enclaves of academe. We no longer live in the (great) Age of Creation. This may come as a surprise or news to some, but we haven't, dare one say it, since Shakespeare. We live, make do, and thrive in the (mediocre) Age of Commentary, where, if it is any good, every new work of literature is an unpredictable and unexpectedly moving re-creation. As such, the novel remains the greatest form of "commentary" on Shakespeare. The greatest commentators are novelists, not academic theorists. A brilliant theorist/critic like Franco Moretti is painfully aware of this. So he reduces literature (and the experience of reading) to pseudo-scientific analyses, to "facts" and matter (in the rigidly Marxist sense) . In the process, he doesn't just demystify literature and reading, he replaces the latter altogether with "literary studies", that is, academic commentary. Still, as Nabokov once said, every true writer is someone who experienced ecstasy as a reader. Hence Eagleton's "how-to-read" is not just timely, it is a necessary synthesis on reading. Understanding literature, through the most useful paradigms of "genre", "storytelling", "form", "language", and "tone", is back with a vengeance, and one hopes, for good. Eagleton does not transcend Harold Bloom, on the one hand, or James Wood, on the other. On the contrary, he now writes in the same breath, with a renewed enthusiasm that surpasses arid, pretentious, and useless "theory". An absolute "must-have" title for Terry Eagleton collectors. <b><i> This title is a contemporary classic. This is one of few copies of the First Hardcover Edition/First Printing still available online and is in especially fine condition: Clean, crisp, and bright, a pristine beauty. Please note: Copies available online have serious flaws, are subsequent printings, or are remainder-marked. This is surely an accessible and lovely alternative. A scarce copy thus. </b></i> One of the most important literary critics of our time. A fine copy. (SEE ALSO OTHER TERRY EAGLETON TITLE IN OUR CATALOG). ISBN 0300190964.

fine
A book in fine condition exhibits no flaws. A fine condition book closely approaches As New condition, but may lack the...[more]
crisp
A term often used to indicate a book's new-like condition. Indicates that the hinges are not loosened. A book described as crisp...[more]
First Edition
In book collecting, the first edition is the earliest published form of a book. A book may have more than one first edition in...[more]
jacket
Sometimes used as another term for dust jacket, a protective and often decorative wrapper, usually made of paper which wraps...[more]