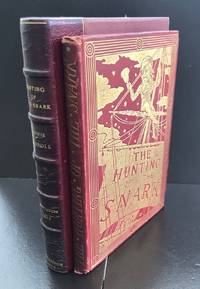 The Hunting Of The Snark : Presentation Copy Signed By The Author

The Hunting Of The Snark : Presentation Copy Signed By The Author

The First UK printing published by Macmillan and Co, London in 1876. The BOOK is in Very Good+ condition. One of approximately 100 copies in the publisher's deluxe binding of red cloth, although only 80 copies may have been ready for Carroll to sign at publication. Full gilt illustration on the front and back covers, all page edges gilt with coated black end papers as issued. The 'Burn' bindery ticket is present (as called for) on the rear paste-down. Complete with all nine illustrations by Henry Holiday with plain tissue guards (one tissue guard is missing). With 'Baker' not 'Butcher' on p. 83. Easing of both hinges but less so the front hinge. The binding remains tight. Slight pushing at the spine ends and a little light rubbing at the corners. The gilt cover decoration remains bright. A few minor marks to a handful of pages but generally a clean copy internally. 'Blairhame' bookplate of the noted bibliophile to the the front pastedown. The book has NOT undergone any restoration or repairs. The book has been inscribed at publication by the author to the half-title: 'William M. Wilcox, from his affte. Cousin & Godfather, the author, Mar. 29. 1876'. With the personal stamp of 'W.M. Wilcox' to the upper half-title page. Wilcox was to sadly die later that year of tuberculosis. Biographer Morton N. Cohen connects the creation of 'The Hunting of the Snark' with the illness of Carroll's cousin and godson Charlie Wilcox. On 17 July 1874, Carroll travelled to Guildford, Surrey, to care for him for six weeks, while the young man struggled with tuberculosis. The next day, while taking a walk in the morning after only a few hours of sleep, Carroll thought of the poem's final line: 'For the Snark was a Boojum, you see'. [Morton N. Cohen (1995) : Lewis Carroll: A Biography.]. A number of Carroll's relatives including Uncle William Wilcox and many of his Wilcox cousins (Kate, Bessie, Charlie, Leonard, William and George) all died during the period 1868-76 (Lewis Carroll Society). 'Although best known as the author of 'Alice's Adventures in Wonderland' (1865) and 'Through the Looking Glass' (1871), Lewis Carroll, was also an avid reader and writer of poetry. He greatly enjoyed the poems of the Victorian writers Alfred, Lord Tennyson, and Christina Rossetti. His own poems were varied . some humorous nonsense, some filled with hidden meanings, and some serious poems about love and life. [Snark] stands out from all the other poems that Carroll wrote. It has inspired parodies, continuations, musical adaptations, and a wide variety of interpretations. Carroll originally intended it as a set of verses to be included in another of his children's stories, but it grew too long and became a book in its own right (Wakeling). Although typically found in black-blocked buff cloth, Lewis Carroll wrote to his publisher on 21 March 1876 ordering copies of The Hunting of the Snark in various colours stamped in gilt, intended as gifts for friends and his family, requesting '100 in red and gold, 20 in dark blue and gold, 20 in white vellum and gold.' Housed in a custom chemise and half morocco slipcase with gilt tiling. Regarding copies inscribed by the author on publication day, Peter Harrington Books 'trace at auction since 1975, seven copies in red (including the author's own retained copy), five copies in blue, and one in green (Peter Harrington Cat.). A significant presentation copy. More images available on request. Ashton Rare Books welcomes direct contact.

If-and the thing is wildly possible-the charge of writing nonsense were ever brought against the author of this brief but instructive poem, it would be based, I feel convinced, on the line (in p.4)

Seller rating:
This seller has earned a 5 of 5 Stars rating from Biblio customers.
Biblio.com member since: 2015
Market Harborough, Leicestershire
Ask Seller a Question

We trade as a family-run internet business in Market Harborough in the heart of the Midlands. We have over 10 years experience of collecting and selling a range of genres, specialising in iconic modern fiction and children's titles. Please feel free to browse our website: www.ashtonrarebooks.com. All items are fully described and if any reasonable discrepancy is noted on arrival to the customer, a full refund including payment for return to us will be made. Items over £250 may be paid for in instalments subject to agreement- however, all books remain the property of Ashton Rare Books until the full balance has been paid. Please contact us at : les@ashtonrarebooks.com if you are looking for a particular title or require further assistance.We are full members of the PBFA, ABA and ILAB.

good+
A term used to denote a condition a slight grade better than Good.
paste-down
The paste-down is the portion of the endpaper that is glued to the inner boards of a hardback book. The paste-down forms an...[more]
vellum
Vellum is a sheet of specialty prepared skin of lamb, calf, or goat kid used for binding a book or for printing and writing. ...[more]
hinge
The portion of the book closest to the spine that allows the book to be opened and closed.
Cloth
"Cloth-bound" generally refers to a hardcover book with cloth covering the outside of the book covers. The cloth is stretched...[more]
bookplate
Highly sought after by some collectors, a book plate is an inscribed or decorative device that identifies the owner, or former...[more]
rubbing
Abrasion or wear to the surface. Usually used in reference to a book's boards or dust-jacket.
tight
Used to mean that the binding of a book has not been overly loosened by frequent use.
morocco
Morocco is a style of leather book binding that is usually made with goatskin, as it is durable and easy to dye. (see also...[more]
edges
The collective of the top, fore and bottom edges of the text block of the book, being that part of the edges of the pages of a...[more]
inscribed
When a book is described as being inscribed, it indicates that a short note written by the author or a previous owner has...[more]
spine
The outer portion of a book which covers the actual binding. The spine usually faces outward when a book is placed on a shelf....[more]
gilt
The decorative application of gold or gold coloring to a portion of a book on the spine, edges of the text block, or an inlay in...[more]