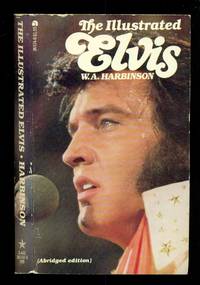 by Harbinson, W A

Grosset and Dunlap, Inc. Publishers - A Tempo Star Book, 1977. Pages are not numbered. This book was first published in the United States in 1976 by Grosset & Dunlap, Inc. This Tempo Star edition released in 1977 and is a special picture selection with black and white photographs on almost all pages. Put on your blue suede shoes, baby, and come dreaming. Here is Elvis Presley, illustrated as child, Southern boy, loner, bully, madman, hero, crooner, lover, dreamer, genius and king. In startling photographs from. all periods of his life, here is the story of the man who was the quintessence of American popular music and its greatest legend. Before Dylan, Lennon, and Jagger, Elvis Presley became the enfant: terrible of pop music. In a couple of short months, he exploded from his poor childhood in Memphis to rescue an entire generation from post-war boredom. This remarkable pictorial biography by W. A. Harbinson traces Elvis' career from his "white trash" childhood to the top, and follows him on through his years in show business and films to his death at 42. Flashy, magnetic, and outrageous as a performer, he was secluded and ambiguous in his private life. Anyway you look at it, there was no one like Elvis. From Memphis to myth. . First Tempo Star Edition. Mass Market. As New.

We accept checks, money orders, Discover, MasterCard and Visa. Books may be returned for any reason providing a request is made within 7 days of receipt. Return shipping charges refunded if book is not as described.

Seller rating:
This seller has earned a 5 of 5 Stars rating from Biblio customers.
Biblio.com member since: 2005
Albuquerque, New Mexico
Ask Seller a Question

We are a family owned and operated bookstore in same location for 49 years. We have built our business on integrity, professional and personal service. General line of new and used paperback and hardback books, comics and graphic novels.

Mass Market
Mass market paperback books, or MMPBs, are printed for large audiences cheaply.  This means that they are smaller, usually...[more]
Poor
A book with significant wear and faults. A poor condition book is still a reading copy with the full text still readable. Any...[more]
New
A new book is a book previously not circulated to a buyer. Although a new book is typically free of any faults or defects,...[more]