Home Sanctum Books Impact of Tantra on Religion and Art (Series: Tantra in… 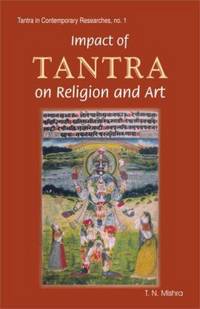 Impact of Tantra on Religion and Art (Series: Tantra in Contemporary Researches 1)

Impact of Tantra on Religion and Art (Series: Tantra in Contemporary Researches 1)

500 Copies Available from This Seller

D.K. Printworld (P) Ltd., 2004. 2nd edition. Hardcover. New. 15 x 23 cm. With its roots (perhaps) in the prehistoric times, Tantra is a unique, highly complex spiritual tradition of India. Which is hard to define and still harder to be grasped by the non-initiated largely because of its occult and mysteriously ritualistic elements, often accompained by equally mysterious mantras, yantras, kriyas and even sexual practices. As a religious philosophy, this esoteric cult of Sakti: the female principle, seeks to discover the source of cosmic power within the human body through intensely specialized yogic activity. And, like yoga, it transcends religious boundaries. Introducing this non-Vedic, esoteric cult in an altogether fresh perspective, the book looks at tantra both as a philosophy and as a spiritual tradition in its own right, and how tantrism has, in the past, been an irresistible influence not only on major Indian religions (Brahmanical Hinduism, Buddhism, Jainism), but on arts as well Dr. Mishra authenticates his findings with evidence from numerous Vaisnava, Saiva, Sakta, Buddhist, and Jaina texts on religion, philosophy, art and iconography. The author, who has had long, personal interactions with some of the living tantrikas, also tries to dispel certain distortions woven around tantric religion to contextually offer an unbiased account of its evolution, cultic variations, culture, philosophy, mysticism, and cardinal concepts and tenets. Together with relevant visual material, Dr. Mishra`s work will, thus, evoke as much interest in discerning readers as in the scholars of Indian religions, traditional philosophy, arts and art history. Printed Pages: 184.

Seller rating:
This seller has earned a 5 of 5 Stars rating from Biblio customers.
Biblio.com member since: 2010
New Delhi
Ask Seller a Question