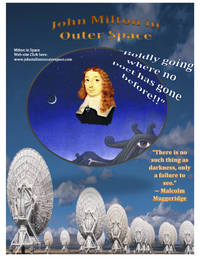 John Milton in Outer Space: Boldly Going Where no Poet Has Gone Before!

An excursion into the dialectic

Conformity backed by coercion is how tribes, nations and cultures are formed. Meanwhile, revolutionaries in those groups envision a better way. Milton's Satan is the archetypal revolutionary. However, Milton's Satan was not searching for a "better way" for those he led, rather he was debased, blinded by jealously and ambition, monumentally tragic, yet courageous nonetheless.

"Milton in Outer Space" envisions Milton being brought back to our time to assess precepts of free speech and the justice of violence in a multicultural, multiracial milieu. Would Milton advocate free speech to win over humanity to create a system of freedom justice and equality? Would he back a firebrand like Cromwell to bring about a just social order? Would he opt for the dictatorship of a philosopher king (possibly a supercomputer to indifferently mete out justice)? Would Milton abandon the current human condition as entirely untenable and beyond saving and go in search of a New Paradise? What would that New Paradise be like? Milton for moderns!!!

Seller rating:
This seller has earned a 5 of 5 Stars rating from Biblio customers.
Biblio.com member since: 2017
Brooklyn, New York
Ask Seller a Question

The WAH Bookstore is located ay 135 Broadway in Williamsburg Brooklyn

jacket
Sometimes used as another term for dust jacket, a protective and often decorative wrapper, usually made of paper which wraps...[more]
New
A new book is a book previously not circulated to a buyer. Although a new book is typically free of any faults or defects,...[more]