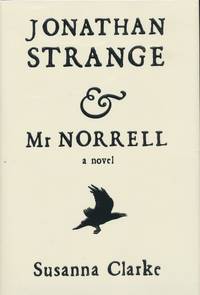 Synopsis: English magicians were once the wonder of the known world, with fairy servants at their beck and call; they could command winds, mountains, and woods. But by the early 1800s they have long since lost the ability to perform magic. They can only write long, dull papers about it, while fairy servants are nothing but a fading memory.

But at Hurtfew Abbey in Yorkshire, the rich, reclusive Mr. Norrell has assembled a wonderful library of lost and forgotten books from England's magical past and regained some of the powers of England's magicians. He goes to London and raises a beautiful young woman from the dead. Soon he is lending his help to the government in the war against Napoleon Bonaparte, creating ghostly fleets of rain-ships to confuse and alarm the French.

All goes well until a rival magician appears. Jonathan Strange is handsome, charming, and talkative-the very opposite of Mr. Norrell. Strange thinks nothing of enduring the rigors of campaigning with Wellington's army and doing magic on battlefields. Astonished to find another practicing magician, Mr. Norrell accepts Strange as a pupil. But it soon becomes clear that their ideas of what English magic ought to be are very different. For Mr. Norrell, their power is something to be cautiously controlled, while Jonathan Strange will always be attracted to the wildest, most perilous forms of magic. He becomes fascinated by the ancient, shadowy figure of the Raven King, a child taken by fairies who became king of both England and Faerie, and the most legendary magician of all. Eventually Strange's heedless pursuit of long-forgotten magic threatens to destroy not only his partnership with Norrell, but everything that he holds dear.

Two magicians shall appear in England. The first shall fear me; the second shall long to behold me ... The year is 1806. England is beleaguered by the long war with Napoleon, and centuries have passed since practical magicians faded into the nation's past. But scholars of this glorious history discover that one remains: the reclusive Mr Norrell whose displays of magic send a thrill through the country. Proceeding to London, he raises a beautiful woman from the dead and summons an army of ghostly ships to terrify the French. Yet the cautious, fussy Norrell is challenged by the emergence of another magician: the brilliant novice Jonathan Strange. Young, handsome and daring, Strange is the very opposite of Norrell. So begins a dangerous battle between these two great men which overwhelms the one between England and France. And their own obsessions and secret dabblings with the dark arts are going to cause more trouble than they can imagine.

Seller rating:
This seller has earned a 5 of 5 Stars rating from Biblio customers.
Biblio.com member since: 2019
Santa Monica, California
Ask Seller a Question

Encanto Books represents a collection of approximately 5,000 first edition books, comprised primarily of hardcover fiction, but includes a sizable number of 1950s and 1960s pulp paperback publications as well. Spanning a timeframe from the 1930s Depression era all the way to the present day, the collection has something of interest for virtually any serious antiquarian. A majority of the books for sale are true first editions; many of these are signed editions, too. Encanto books has succeeded in collecting virtually the entire output from some of the greatest American mystery writers ever.