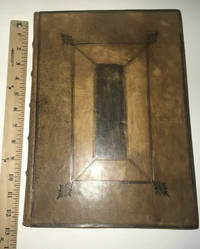 JOSEPHUS. THE FAMOUS AND MEMORABLE WORKES OF JOSEPHUS A Man of Much Honor and Learning Among the Jewes. Translated into English by Thomas Lodge. Printed in 1602.

JOSEPHUS. THE FAMOUS AND MEMORABLE WORKES OF JOSEPHUS A Man of Much Honor and Learning Among the Jewes. Translated into English by Thomas Lodge. Printed in 1602.

Rebound in a full leather binding.This is a CAMBRIDGE STYLE binding, from the mid 20th century.This binding would have cost a significant amount of money.The colophon page is present, with marginal wear, and archival conservation to that page only.This book is textually complete.This book is in very good and highly presentable condition despite it's age.In poor condition and lacking pages, this book still retails for over $5000.00.Impossible to obtain in this condition.Rare.

TITLE PAGE: Printed by Peter Short at the Charges of G. Bishop, S. Waterson, P. Short, and Tho. Adams. 1602.(The Warres and Utter Ruine of the Jewes title page is also dated 1602.)
COLOPHON: Printed At London By Peter Short, dwelling On Bed-street hill, at the signe of the Starre. 1602.

The first English Edition of Josephus was printed in 1602.

A controversial figure, Josephus remains undeniably important in history, literature and the arts. His historical works—The Jewish War, Antiquities of the Jews, Against Apion and his autobiography or Apologia— are "among the most valuable sources for the study of early Judaism and early Christianity" (Columbia University Press).
"Without [these writings] little would have been known of the history of the Second Temple nor would it have been possible to write such a history… In point of literary talent Josephus ranks among the leading writers in world literature. His style is epic, his portrayals plastic, his gift of description captivates the reader alike by its fidelity and its colorful presentation" (Encyclopedia Judaica).
Thomas Lodge, was the first to publish the writings of Josephus in English, in 1602.

The first printed Greek Edition of Josephus was published by Frobenius and Episcopius (Basel, printed in 1544).

The first English translation, by Thomas Lodge, appeared in 1602, with subsequent editions appearing throughout the 17th century.

The works of Josephus are major sources of our understanding of Jewish life and history during the first century.

title page
A page at the front of a book which may contain the title of the book, any subtitles, the authors, contributors, editors, the...[more]
First Edition
In book collecting, the first edition is the earliest published form of a book. A book may have more than one first edition in...[more]
Poor
A book with significant wear and faults. A poor condition book is still a reading copy with the full text still readable. Any...[more]
G
Good describes the average used and worn book that has all pages or leaves present. Any defects must be noted. (as defined...[more]
colophon
The colophon contains information about a book's publisher, the typesetting, printer, and possibly even includes a printer's...[more]