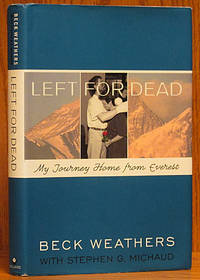 Left For Dead: My Journey Home from Everest (SIGNED)

Left For Dead: My Journey Home from Everest (SIGNED)

I am neither churchly nor a particularly spiritual person, but I can tell you that some force within me rejected death at the last moment and then guided me, blind and stumbling--quite literally a dead man walking--into camp and the shaky start of my return to life. On May 10, 1996, nine climbers perished in a blizzard high on Mount Everest, the single deadliest day ever on the peak. The following day, one of those victims was given a second chance. His name was Beck Weathers.The tale of Dr. Seaborn Beck Weathers's miraculous awakening from a deep hypothermic coma was widely reported. But the hidden story of what led the pathologist to Everest in the first place, and his painful recovery after his dramatic rescue, has not been told until now. Brilliant and gregarious, Weathers discovered in his thirties that mountain climbing helped him cope with the black dog of depression that had shadowed him since college. But the self-prescribed therapy came at a steep cost: estrangement from his wife, Peach, and their two children. By the time he embarked for Everest, his home life had all but disintegrated. Yet when he was reported dead after lying exposed on the mountain for eighteen hours in subzero weather, it was Peach who orchestrated the daring rescue that brought her husband home. Only then, facing months of surgery and the loss of his hands, did Beck Weathers also begin to face himself, his family, his past and uncertain future. Told in Beck Weathers's inimitably direct and engaging voice--with frequent commentary from Peach, their family, their friends and others involved in this unique journey--Left for Dead shows how one man's drive to conquer the most daunting physical challenges ultimately forced him to confront greater challenges within himself. Framed by breathtaking accounts of his near death and resurrection, and of his slow and agonizing physical and emotional recovery, Left for Dead offers a fascinating look at the seductive danger of extreme sports, as in rapid succession a seemingly unstoppable Weathers attacks McKinley, Elbrus, Aconcagua, Kilimanjaro--before fate stops him cold, high in the Death Zone of the world's tallest peak. Full of deep insight and warm humor, Left for Dead tells the story of a man, a marriage and a family that survived the unsurvivable. Candid and uncompromising, it is a deeply compelling saga of crisis and change, and of the abiding power of love and family--a story few readers will soon forget.

SHIPPING: Domestic USPS Media Mail is $3.50 per order, with additional titles shipping at NO ADDITIONAL CHARGE.

FOREIGN ORDERS: Price listed is AN ESTIMATE. We Will Gladly Quote Your Shipping Options.

RETURNS POLICY: Books are graded conservatively and are returnable if not as described. Please contact us first for instructions for any return.

Seller rating:
This seller has earned a 5 of 5 Stars rating from Biblio customers.
Biblio.com member since: 2003
League City, Texas
Ask Seller a Question

We are an Open Shop located in the Historic District of League City, Texas, midway between Houston and Galveston. We have served Colleges and Libraries since 1967 and opened to the Public in 1992 in a renovated c.1911 house built by Judge J.S. Scott and his wife, Pearl. Our Store specialty is Texana, both new and out-of-print. We also have a good selection of General Stock, with emphasis in Western Americana, Art, Architecture and History. We provide complete ordering services for in-print titles and diligently search for the hard-to-find or out-of-print title you desire. Feel free to visit our shop Tues-Fri 10-6; Thurs Noon-8, Sat 10-4 Central Time. Closed Sunday & Monday.

fine
A book in fine condition exhibits no flaws. A fine condition book closely approaches As New condition, but may lack the...[more]
spine
The outer portion of a book which covers the actual binding. The spine usually faces outward when a book is placed on a shelf....[more]
tight
Used to mean that the binding of a book has not been overly loosened by frequent use.