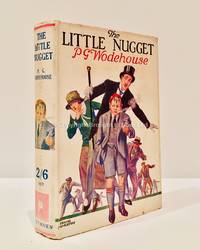 From the book:If the management of the Hotel Guelph, that London landmark, could have been present at three o'clock one afternoon in early January in the sitting-room of the suite which they had assigned to Mrs Elmer Ford, late of New York, they might well have felt a little aggrieved. Philosophers among them would possibly have meditated on the limitations of human effort; for they had done their best for Mrs Ford. They had housed her well. They had fed her well. They had caused inspired servants to anticipate her every need. Yet here she was, in the midst of all these aids to a contented mind, exhibiting a restlessness and impatience of her surroundings that would have been noticeable in a caged tigress or a prisoner of the Bastille. She paced the room. She sat down, picked up a novel, dropped it, and, rising, resumed her patrol. The clock striking, she compared it with her watch, which she had consulted two minutes before. She opened the locket that hung by a gold chain from her neck, looked at its contents, and sighed. Finally, going quickly into the bedroom, she took from a suit-case a framed oil-painting, and returning with it to the sitting-room, placed it on a chair, and stepped back, gazing at it hungrily. Her large brown eyes, normally hard and imperious, were strangely softened. Her mouth quivered.

Seller rating:
This seller has earned a 5 of 5 Stars rating from Biblio customers.
Biblio.com member since: 2009
London, Greater London
Ask Seller a Question

About Brought to Book Ltd

Founded by Adam and Justin Lay, Brought to Book Ltd offers rare and collectible titles from the more interesting and entertaining corners of the book world.

jacket
Sometimes used as another term for dust jacket, a protective and often decorative wrapper, usually made of paper which wraps...[more]
fine
A book in fine condition exhibits no flaws. A fine condition book closely approaches As New condition, but may lack the...[more]