Join us June 2–June 4, 2022 for our second virtual antiquarian book fair!
Preregister now for Biblio.live and get $10 to use at the fair.
Home House of Our Own Books Making Mischief: Dada Invades New York 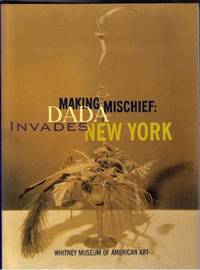 New York, NY, U.S.A.: Whitney Museum of American Art, 1996. This book is the catalog of an exhibition at the Whitney Museum from November 1996 to February 1997 whose intent was to show that, as important as Dada was to the growth of American modernism, the ferment of New York played an equally critical role in the evolution of Dada itself; New York Dada activity, reflected within a small but important community of artists, writers, critics, and patrons located in and around the Arensberg circle, was influenced by new technologies of photography and cinema, psychoanalytic theory of the subconscious mind, and the social tumult of massive waves of immigration; includes scholarly essays on New York Dada and many illustrations; contributors include Francis Naumann, the exhibition curator, Todd Alden, Steven Watson, Lauren Ross, Allan Antliff, Jay Bochner, Abraham Davidson, Lauren Dalrymple Henderson, Amelia Jones, Rosalind Krauss, Molly Nesbit, Robert Rosenblum, Dickran Tashjian, Beth Venn, Barbara Zabel (heavy card covers with very slight edgewear, otherwise a bright, clean, tight copy). Paperback. Near Fine. 7 1/2" X 10 1/4".

Bookseller
House of Our Own Books

House of Our Own Books

Most book orders are shipped the same day or the next day, except on weekends.

House of Our Own Books

Seller rating:
This seller has earned a 5 of 5 Stars rating from Biblio customers.
Biblio.com member since 2005
Philadelphia, Pennsylvania
Ask Seller a Question

About House of Our Own Books

NOTICE: Face masks are required in the bookstore at all times Our shop is located on two floors of a quiet, comfortable Victorian house on the edge of the University of Pennsylvania campus. The large stock of general and scholarly books is divided between new and used, and is well-organized and categorized. ** Only a very small fraction of our inventory is currently on the internet, so if you do not find what you are looking for, please contact us by phone or email to see if we have a copy in the store. ** CAUTION: If you use the large search box on this page you are searching OUR online inventory. If you use any other search box you may be searching the entire online inventory of ALL Biblio booksellers. Hours: Mon to Fri, 11:00 to 6:00 / Sat & Sun, 12:00-6:00

fine
A book in fine condition exhibits no flaws. A fine condition book closely approaches As New condition, but may lack the... [More]
tight
Used to mean that the binding of a book has not been overly loosened by frequent use.