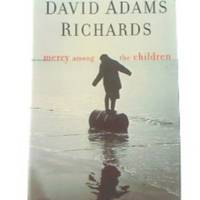 Mercy Among The Children.

Mercy Among The Children.

David Adams Richards was born in 1950 in Newcastle, New Brunswick, the third of six children in a working-class family. Though he didn’t grow up as poor as Lyle, he knew something about feeling different in a rural community, having a “townie” father who owned a movie theatre and suffered from narcolepsy. He found his calling at the age of fourteen, after reading Oliver Twist , and embarked on a life of extraordinary purpose, which he says didn’t help the family finances: "Sometimes…I thought it would be better if I were a plumber, but I wouldn’t be very good." He studied literature at St. Thomas University in Fredericton, and while working on a second novel he attended an informal weekly writers workshop, known as the Ice House Gang for the converted storage room where they met. There he received encouragement from established writers including the late Alden Nowlan, whom he names as an important influence along with Faulkner, Pushkin, Dostoevsky and Emily Bronte. He published a book of poetry, Small Heroics , in the New Brunswick Chapbooks Series in 1972. When the first five chapters of The Coming of Winter won the Norma Epstein Prize for Creative Writing in 1973, he left university three credits short of his degree to write full-time; the book was published the following year, and translated into Russian. He and his wife Peggy, who had met at 17 and married at 21, spent several years travelling in Canada, Australia and Europe (they particularly loved Spain), where he found he could write about the Miramichi he loved regardless of where he lived. Gradually, he took postings as writer-in-residence at universities in New Brunswick, Ottawa, Alberta, and Virginia. In 1997, they moved to Toronto, where they now live with their two young sons, John Thomas and Anton, and their dog Roo. Living in Toronto where Peggy has family allows the rest of the family to live a normal life when Richards is absorbed in his work and writing late at night. Though Richards has won or been nominated for almost every award for which he's been eligible, one of only three writers to win both fiction and non-fiction categories of the Governor General’s Award, his writing was often criticized for being too bleak or too regional, and it was years before he made money. He laughs at the sales of his early work: “For a long while if I sold 200 books, I’d be saying: Oh, great! And, you know, a $50 advance! That's great. I only worked three years, I don't know if I can spend $50.” His screenwriting career was launched in 1987 with the premiere of Tuesday, Wednesday . The screen play for Small Gifts , a Christmas special first aired on the CBC in 1994, received international acclaim at the New York Film Festival and won him his first Gemini; he won his second for the screen adaptation of For Those Who Hunt the Wounded Down . He continues to adapt his own work for the screen. As he documented in a passionate and humorous meditation, Lines on the Water , he loves fly-fishing on the Miramichi river. No longer a resident, he was recently made an honorary Miramichier by the people of New Brunswick so he could get a fishing licence. He has also written a non-fiction book on the place of hockey in the Canadian soul, and is working on a hunting book, though hasn’t hunted big game for several years. His fiction shows his deep interest in rural men and women, who are “extremely condescended to and misunderstood so much of the time”. Characters like Cynthia and Mat Pit and Leo McVicer he sees as brilliant and strong, and not particularly unusual in a rural environment. He remembers people who were “reading the classics when they were 11-years-old and lived in a dirt shack”, like Sydney Henderson. Hand in hand with this goes a fascination with power, whether economic or intellectual, and its capacity for corruption. He recalls his university years during the Vietnam War, when “power was the main focus of the people”, and seeing friends use the peace movement for their own gain. “I saw how lives were bullied and humiliated by this… And Peggy and I became outcasts because I refused to participate... I thought that if power is so easily attained and misused by people who say they're for peace then there must be something fundamentally wrong with it… I'm not saying these people are good or bad, I'm just saying it's a human failing.” He admires writers who “leave a lot unsaid”, and tries to put that quality into his own work now, having pared down his technique. His short stories and articles have been published in literary magazines and anthologies, and he has two unpublished plays, The Dungarvan Whooper and Water Carriers, Bones and Earls: the Life of François Villon , and one unpublished novel, Donna . His literary papers were acquired in 1994 by the University of New Brunswick.

All items returnable within reason

Seller rating:
This seller has earned a 1 of 5 Stars rating from Biblio customers.
Biblio.com member since: 2005
Millbrook, Ontario
Ask Seller a Question

A Source of Scholarly Books with emphasis in Philosophy, Religion, Psychology & Literature.