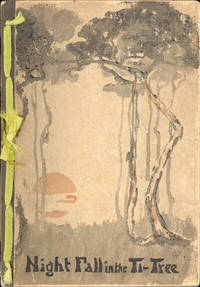 Night Fall in the Ti-Tree

Night Fall in the Ti-Tree

Melbourne: Sign of the Rabbit, 1905. Teague, Violet and Geraldine Rede. Small quarto. (32)pp. Extremely rare first edition. Illustrated with sixteen woodcut illustrations in the Japanese style, six of which are double-page spreads. All but four minor illustrations are hand-initialed in ink by the contributing artist. Set opposite the illustrations, the letterpress-printed verse is a cautionary tale, warning rabbits in their dens to avoid hunter's traps. The atmospheric images, rendered in earth tones, deftly capture both the danger lurking in the night, as well as the peace of a rabbit's simple life. Entirely handmade by Violet Teague and her friend Geraldine Reed in Teague's Melbourne home, Night Fall in the Ti-Tree is the first book in Australia to be produced and illustrated in the Japanese style using colored woodcuts. Teague, who was probably introduced to Japanese prints while studying in England and Europe in the late 1800s, tried to imitate Japanese production techniques as closely as she could. The illustrations were created using water-based inks brushed directly onto the woodblocks, which had been cut along the grain rather than against it, as in Western woodcuts. The binding is also in the Japanese style, with the pages folded at the fore-edge, and stab-sewn through the spine with a green ribbon. Two common techniques in Japanese illustration were also employed to great advantage: asymmetrical illustrations that extend past the edge of the page, and the division of an illustration into two parts for a double-page spread. Taken as a whole, the work is a beautiful and compelling tribute to Japanese style, as well as an important example of Japoniste art in Australia. Teague went on to become a great promoter of Japanese woodblock prints, writing articles and giving demonstrations on technique. Reed published her own book of woodcut illustrations with verse in 1909, titled A Little Book of Trees. Very few copies of this first edition of Night Fall in the Ti-Tree were printed or sold, although it was exhibited several times in Australia following its production, even winning an award at the 1907 First Australian Exhibition of Women's Work. In 1906, it was picked up by English publisher Elkin Mathews for a second edition. Teague re-worked the title page, crediting herself as the author, changing the year on the rabbit logo, and adding Mathews's information under the original imprint. Compared to the 1906 edition, this first 1905 printing has lighter tonal printing to the plates and blacker printing of the text. Original ties replaced with green ribbon, and protected by a custom-made drop-back box. A fine example of a rare item. Together with the 1988 National Gallery of Australia facsimile of the second edition.

Bromer Booksellers specializes in rare and beautiful books, as well as highspots of literature. Owned and operated by Anne and David Bromer, who have been in the business of fine books for nearly fifty years, our shop carries a range of important private press books, designer bookbindings, literary first editions, illustrated books from the fifteenth century to the present, children's books, and miniature books.

First Edition
In book collecting, the first edition is the earliest published form of a book. A book may have more than one first edition in...[more]
facsimile
An exact copy of an original work. In books, it refers to a copy or reproduction, as accurate as possible, of an original...[more]
spine
The outer portion of a book which covers the actual binding. The spine usually faces outward when a book is placed on a shelf....[more]
title page
A page at the front of a book which may contain the title of the book, any subtitles, the authors, contributors, editors, the...[more]
fine
A book in fine condition exhibits no flaws. A fine condition book closely approaches As New condition, but may lack the...[more]
quarto
The term quarto is used to describe a page or book size. A printed sheet is made with four pages of text on each side, and the...[more]