Home Pemberley Natural History Books Odontography; or, a Treatise on the Comparative Anatomy… 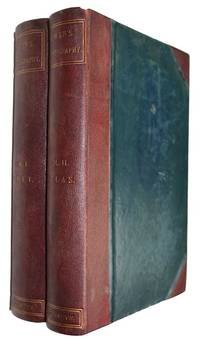 Odontography; or, a Treatise on the Comparative Anatomy of the Teeth; their physiological relations, mode of developement, and microscopic structure, in the Vertebrate Animals. Vol. I-II

Odontography; or, a Treatise on the Comparative Anatomy of the Teeth; their physiological relations, mode of developement, and microscopic structure, in the Vertebrate Animals. Vol. I-II

London: Hippolyte Bailliere, 1840-1845. Text: (6), [ix]-xix, (1), lxxiv, (2), 655, (1); Atlas: (2) Adverts, (4), [7]-37, (1), 168 plates (2 double page). . HB. 2 vols (Text + Atlas), roy 8vo, later 19th century half morrocco, teg, some rubbing and light staining to boards, minor rubbing to joints with small chip to top of front joint of Atlas. Endpapers foxed, some foxing/spotting to plates, light browning to some pages. Half titles present, Text volume with Errata leaf following p. lxxiv. Atlas with one leaf of Adverts preceding half title. Very good set. From the library of. First edition. Richard Owen's classic work on the comparative anatomy of vertebrate teeth. 'Ths vast storehouse of detail on the structure of teeth was the first large-scale original work by Sir Richard Owen ... The scope of Owen's writing, based on his own dissections and usually illustrated with his own drawings, has hardly been surpassed ... The work covered the whole range of the toothed vertebrates, fossil and extant, and discussed in detail the microscopic structure of the teeth and the physiology of dentition.' (LeFanu, Notable Medical Books). The lithographic plates are by several artists including Richard Owen himself and J. Erxleben, but the majority are drawn on zinc by Lens Aldous, at least some may be from early photomicrographs taken by Joseph Bancroft Reade (1801-1870). Plates are numbered 1, 2, 1-150, plus 62a,b, 63a,b, 64a,b, 65a,b, 70a, 73a, 75a, 87a, 89a, 113a, 119a, 122a. Plate 2 is sometimes found printed in red, but is here in black. 'Owen's comprehensive study of mammalian teeth led him into palaeontology, of which he soon became one of the masters.' (Garrison-Morton). Owen states on p. xv of the Introduction, that in 1837 '... I received form Mr. Darwin many fragments of the teeth of the extict Megatherium, Megalonyx, Mylodon and Toxodon collected during his travels in South America.' Owen was later to became one of the chief opponents of Darwinism. Richard Owen (1804-1892) was an English biologist, comparative anatomist and paleontologist. He was Hunterian professor at the Royal College of Surgeons, from 1836 to 1856, and subsequently, superintendent of the natural history department of the British Museum. He campaigned for a separate National Museum of Natural History, which eventually resulted in the removal of the natural history collections of the British Museum to a new building at South Kensington: the British Museum (Natural History).Garrison-Morton, 329; Nissen ZBI, 3408; Hagelin & Coltham, p. 150..

We accept VISA, MASTERCARD, AMEX, JCB cards. Postage extra. Books which are not as described may be returned. Please contact us first. Not all books avaialable from us are listed on Biblio - see our website for full listing

Seller rating:
This seller has earned a 5 of 5 Stars rating from Biblio customers.
Biblio.com member since: 2005
IVER
Ask Seller a Question

Pemberley Books
Specialist Natural History Booksellers, providing a mail order service for individual, museums, research institutes, universities and libraries around the world. We supply new, used and antiquarian books on all aspects of natural history, particularly specialising in entomology.
Established 1989.
Website: www.pemberleybooks.com Searchable stock database and secure ordering
We also have a specialist bookshop in Iver (just west of London - easy to reach by train or car, and close to Heathrow Airport)

plate
Full page illustration or photograph. Plates are printed separately from the text of the book, and bound in at production. I.e.,...[more]
First Edition
In book collecting, the first edition is the earliest published form of a book. A book may have more than one first edition in...[more]
New
A new book is a book previously not circulated to a buyer. Although a new book is typically free of any faults or defects,...[more]
half title
The blank front page which appears just prior to the title page, and typically contains only the title of the book, although, at...[more]
errata
Errata: aka Errata Slip A piece of paper either laid in to the book correcting errors found in the printed text after being...[more]
foxed
Foxing is the age related browning, or brown-yellowish spots, that can occur to book paper over time. When this aging process...[more]
rubbing
Abrasion or wear to the surface. Usually used in reference to a book's boards or dust-jacket.