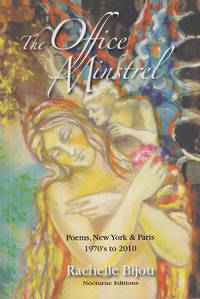 ~ The book is comprised of three sections--each evoking the workplace atmosphere of its time--Entrance to the City (New York City, 1970's), Pointing the Marble (Ne York City, 1980's-2001) and, Zola Color (Paris, 2006-2010). The poems are loosely arranged in a bright and intuitive order and each section closes with a perceptive end-of-year poem. French words, idioms and titles embellish and lend a novel spin to the text. We follow the keen observations of the poet as she describes everyday Iife, la vie quotidienne, like going to the gym or a poetry reading, accompanying a friend to the eye infirmary or attending a film during the summer at Bryant Park. ''Not in Service,'' a post-September 11, 2001, poem ends with the tough and memorable words ''. . . pure and full of dreams, my city and I remain.'' In the last section, Zola Color. we get a fly-on-the-wall view of corporate life seen through the eyes of Leda, a woman whom we have met earlier in the book. Allusions to poetic masters abound: Frank O'Hara, John Ashbery and James Schuyler, James Joyce, T.S. Eliot, Percy Shelley, Marianne Moore, Charles Baudelaire, Matthew Amold, and Bob Dylan. Traditional poetic forms like the sonnet in ''Chant d'Aromes,'' the pantoum in ''Pantoum Outlook,'' and the cento in ''Losing Battles,'' are treated in clever and surprising ways.

~ ''No Thanatopsis in Bryant Park tonight / Everyone’s thumping and alive / under the open sky / --especially Barbara and Fred / We’re both rotten. / Yeah, only you’re a little more rotten. / No doubt William Cullen would be appalled / by all the people cluttering his landscape'' --from ''Triple Indemnity''

Veery Books' specialties: (1) Music scores (Symphonic, Chamber, Choral, and Solo repertoire, Full conductor's scores and study scores and parts throughout the range of classical music, including rare or first editions), bibliographies, histories, biographies, auction catalogs, literature and ephemera related to classical music and classical composers and musicians. (2) American popular music from the early 19th century to the 1940s. (3) Poetry and literature with emphasis on American poetry and fiction. (4) Rare and unusual American imprints from the 19th century. (5) Bibliographies, Bookseller's catalogs, Auction catalogs for books, manuscripts, ephemera, prints, and art. Veery Books strives to provide accurate bibliographic and condition descriptions including photographs for each offering and where possible to offer quotations or unusual facts about the offering. Veery Books will be happy to assist you in your book search and welcomes inquiries regarding thousands of yet uncatalogued musical scores, bookseller's and auction catalogs.