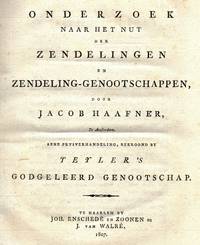 First edition of a landmark Dutch anti-colonialist and anti-missionary treatise. This controversial and heavily criticized work marks a shift in thinking about the Western influence around the world. It is a rare work and here in excellent. Only a few copies are recorded in libraries outside The Netherlands. At the end of November 1803, the Teyler's Religious Society in Haarlem organized a competition. A treatise was to be prepared on the question, "What service have missionaries done to the propagation of true Christianity in the past two centuries, and what fruit is there been to expected from the present active missionary societies in this regard?". On November 30, 1804, Haafner's manuscript of 195 pages arrived. This turned out to be the only entry, making it inevitable to crown him the prize winner. He was born in Halle in Germany in 1754, came to Amsterdam with his parents in 1765, and left with his father in 1766 for the East Indies. Shortly before arriving in Cape Town, Haafner's father died and the twelve-year-old boy was left alone. He was taken into foster care. In 1770 he returned to Amsterdam, but the following year he left for Batavia. Via Dutch India he ended up in the British Indies. He spent years on the Coromandel Coast in eastern India, traveled in India and Sri Lanka and returned to the Netherlands in 1787. He made bad investments and lost all his money, which is why he tried to earn some money as a translator, later also as a publicist. His first travelogue appeared in 1806, the present award-winning treatise on missions in 1807, and he died in 1809. After his death, his son published many of his father's works with success. Haafner had seen missionaries at work with his own eyes in the Cape Colony, in Indonesia, and in India. His judgment on missions is damning. He recognized that mission implies cultural destruction, and is an illicit interference with other religious beliefs. In his treatise, Haafner treats various population groups per chapter. In the first chapter of his essay he deals with missions among the Hottentots. During his years in the Cape Colony, he'd gotten to know these people, and even had a relationship with a Hottentot girl. He qualified the mission to the Hottentots as a hopeless task. But Haafner not only scathingly judged what he saw with his own eyes of missionary zeal and missionary crime. In his second chapter he writes about the black slaves in the Americas. He vigorously rages against slavery, against the capture of slaves in Africa and against the transfer of them to the Americas. In the third chapter Haafner deals with the mission to the Indians in North America and the fourth chapter on the mission among the Hindus in India. His style and eloquence make him the best Dutch writer on this subject before Multatuli, and as a polemicist in many ways ahead of him that. This treatise is still a pleasure to read and relevant today. Later editions appeared in 1823 (same publisher) and 1993 (edited by Jaap de Moor and Paul Van de Velde). Haafner's creed is as follows: "I see all people of whatever colour, nation and religion as my fellow humans and brothers; whomever thinks the same will not be offended, but indeed be pleased, that I defend and intercede the innocent and oppressed Indians, and seek to load their tyrants with shame".

Seller rating:
This seller has earned a 5 of 5 Stars rating from Biblio customers.
Biblio.com member since 2021
The Hague
Ask Seller a Question