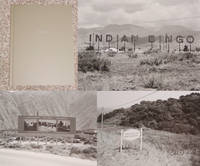 Tucson, AZ: Nazraeli Press, 2009. First Edition. First Printing.. Hardcover. As New/No Dust Jacket, As Issued.. Tucson, AZ: Nazraeli Press, 2009. Hardcover. As New/None, As Issued. First Edition/First Printing. 16 pages. Artist Book. The 53rd title in the now-legendary "One Picture Book" Series by Nazraeli Press, one of the most superb ongoing projects of contemporary art photography. Limited Edition of 500 numbered and signed copies. Accompanied by one tipped-in, original print by the artist/photographer (hence the Series' name). An elegant production by Chris Pichler: Small-size volume format. Titles on the cover and spine, as issued. Photographs and text by Joe Deal. Printed on pristine-white, archival stock paper to the highest standards. Without DJ, as issued. Presents Joe Deal's "Indian Bingo". Photographs of billboard signs, advertising for the Indian Reservation gambling casinos that have dotted (and desecrated) what were once considered sacred lands. "In 1983, as the inland basin of Southern California was being subdivided by developers and filled in with new waves of residents, a sign at its outskirts appeared that was unusual both in meaning and appearance. The sign, 'Indian Bingo', came into view as you emerged from the basin traveling east through the San Gorgonio Pass into the Coachella Valley headed for Palm Springs" (Joe Deal). Deal goes on to explain the significance of this sign in order to show the Native Americans' overly aggressive, parallel conversion of California into their slick, tax-free slice of The American Dream. There are still some "land-mine", unresolved, and delicate subjects in America (such as racism, homosexuality, and abortion), the country's colonization by the West being the most problematic because it is the most fundamental one of all. The "re-colonization" by Native American Indians of their land is surely their way of throwing in America's face what was taken from them, a "mirroring" effect that Joe Deal bravely addresses in all of its disturbing and complex dimensions. A polemic as well as a work of art. An absolute "must-have" title for Joe Deal collectors. <b><i> This is a copy of the Limited Edition, indicated/numbered as such in pencil on the Back Limitation Page. It comes with an original print that is very prominently and beautifully signed in black pen on verso by Joe Deal. This title is a contemporary art photography classic. This is one of few copies of the Limited Edition still available online and is in especially fine condition: Clean, crisp, and bright, a pristine beauty. Please note: The remaining copies from the publisher command $200. This is surely an accessible and lovely alternative. A rare signed copy thus. </b></i> 4 duotone plates, 1 original print. One of the most brilliant American photographers of our time. A fine copy. (SEE ALSO OTHER ONE PICTURE BOOK TITLES IN OUR CATALOG). ISBN 1590052528.

jacket
Sometimes used as another term for dust jacket, a protective and often decorative wrapper, usually made of paper which wraps...[more]
First Edition
In book collecting, the first edition is the earliest published form of a book. A book may have more than one first edition in...[more]
crisp
A term often used to indicate a book's new-like condition. Indicates that the hinges are not loosened. A book described as crisp...[more]
verso
The page bound on the left side of a book, opposite to the recto page.
New
A new book is a book previously not circulated to a buyer. Although a new book is typically free of any faults or defects,...[more]
spine
The outer portion of a book which covers the actual binding. The spine usually faces outward when a book is placed on a shelf....[more]
fine
A book in fine condition exhibits no flaws. A fine condition book closely approaches As New condition, but may lack the...[more]