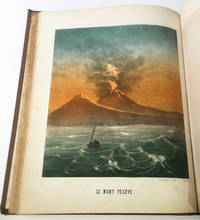 The 36 (of 37) dramatic lithographs were drawn and printed by the Strasbourg engraver Emile Lemaitre, handfinished in color and gum arabic.

The plates are accompanied by explanatory text printed in blue, detailing historical and scientific information, sometimes referring to the latest inventions and events. The Arctic plate includes Sir John Franklin's 1845 doomed expedition to the North Pole, while the Gold Fields plate describes the California Gold Rush of 1848.

Due to restrictions on Japan Post, shipping to USA currently only available via Fed-Ex.

Seller rating:
This seller has earned a 5 of 5 Stars rating from Biblio customers.
Biblio.com member since: 2019
Tokyo
Ask Seller a Question

buckram
A plain weave fabric normally made from cotton or linen which is stiffened with starch or other chemicals to cover the book...[more]
spine
The outer portion of a book which covers the actual binding. The spine usually faces outward when a book is placed on a shelf....[more]
gilt
The decorative application of gold or gold coloring to a portion of a book on the spine, edges of the text block, or an inlay in...[more]
plate
Full page illustration or photograph. Plates are printed separately from the text of the book, and bound in at production. I.e.,...[more]