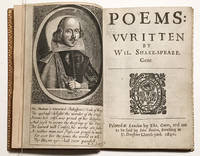 London: Printed by Tho. Cotes, and are to be sold by John Benson, dwelling in St. Dunstans Church-yard, 1640.

FIRST COLLECTED EDITION. This edition by Benson brings together all but eight of the sonnets: A Lover s Complaint , The Passionate Pilgrim (mostly not by Shakespeare), The Phoenix and the Turtle (attributed to Shakespeare), and elegies and other poems honoring Shakespeare by Jonson, Milton, Digges, Herrick, Strode, Carew, and others. Benson famously reorganized the sonnets, probably out of concern that an old-fashioned sonnet sequence would not appeal to the generation of the Cavalier Poets. Many are run together to form poems of twenty-eight lines or more, and all are given titles. Benson also made some effort to disguise the homoerotic content found in some sonnets, perhaps most strikingly in his changes to Sonnet 101 ( O truant Muse, what shall be thy amends ), which he runs together with Sonnet 100 under the title An invocation of his Muse while he also switches the gender of the pronouns to make the poet s lover female.

Seller rating:
This seller has earned a 5 of 5 Stars rating from Biblio customers.
Biblio.com member since: 2020
Kingston, New York
Ask Seller a Question

Founded in 1988, Battledore has been promoting children's books and related references/bibliographies through catalogues, by direct mail, online internet sales and special exhibitions, including the annual ABAA Antiquarian Rare Books Fair in New York City (Park Avenue Armory at 67th Street). Since 2002 we have maintained a "by appointment" store front gallery in Kingston NY that is fully operational. For scheduling a visit to discuss collection development, please email us at battledore@mail.com. The President of Battledore Ltd has represented Maurice Sendak as liaison for private collectors and institutions worldwide from 1970 thru 2003 and continues to maintain a fine inventory of his original artwork along with curated selections of original illustration art for children's books by other well-recognized artists and illustrators.

edges
The collective of the top, fore and bottom edges of the text block of the book, being that part of the edges of the pages of a...[more]
New
A new book is a book previously not circulated to a buyer. Although a new book is typically free of any faults or defects,...[more]
gilt
The decorative application of gold or gold coloring to a portion of a book on the spine, edges of the text block, or an inlay in...[more]
spine
The outer portion of a book which covers the actual binding. The spine usually faces outward when a book is placed on a shelf....[more]
device
Especially for older books, a printer's device refers to an identifying mark, also sometimes called a printer's mark, on the...[more]
morocco
Morocco is a style of leather book binding that is usually made with goatskin, as it is durable and easy to dye. (see also...[more]