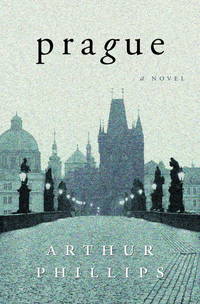 New York: Random House, 2002. A 367 page debut novel of 5 American friends travelling in Hungary. It received a starred review from Publishers Weekly. It is a later printing. It is a very fine hardcover in a very fine dust jacket. New and unread.. Later Printing. Hard Cover. Very Fine/Very Fine.

A first novel of startling scope and ambition, Prague depicts an intentionally lost Lost Generation as it follows five American expats who come to Budapest in the early 1990s to seek their fortune--financial, romantic, and spiritual--in an exotic city newly opened to the West. They harbor the vague suspicion that their counterparts in Prague, where the atmospheric decay of post--Cold War Europe is even more cinematically perfect, have it better. Still, they hope to find adventure, inspiration, a gold rush, or history in the making. What they actually find is a deceptively beautiful place that they often fail to understand. What does it mean to fret about your fledgling career when the man across the table was tortured by two different regimes? How does your short, uneventful life compare to the lives of those who actually resisted, fought, and died? What does your angst mean in a city still pocked with bullet holes from war and crushed rebellion?Journalist John Price finds these questions impossible to answer yet impossible to avoid, though he tries to forget them in the din of Budapest's nightclubs, in a romance with a secretive young diplomat, at the table of an elderly cocktail pianist, and in the moody company of a young man obsessed with nostalgia. Arriving in Budapest one spring day to pursue his elusive brother, John finds himself pursuing something else entirely, something he can't quite put a name to, something that will draw him into stories much larger than himself.With humor, intelligence, masterly prose, and profound affection for both Budapest and his own characters, Arthur Phillips not only captures his contemporaries but also brilliantly renders the Hungary of past and present: the generations of failed revolutionaries and lyric poets, opportunists and profiteers, heroes and storytellers.From the Hardcover edition.

Seller rating:
This seller has earned a 5 of 5 Stars rating from Biblio customers.
Biblio.com member since: 2003
Simi Valley, California
Ask Seller a Question

jacket
Sometimes used as another term for dust jacket, a protective and often decorative wrapper, usually made of paper which wraps...[more]
fine
A book in fine condition exhibits no flaws. A fine condition book closely approaches As New condition, but may lack the...[more]