Home BobPrudhomme, Relentless Bookfinder The Queen of the Big Time A Novel 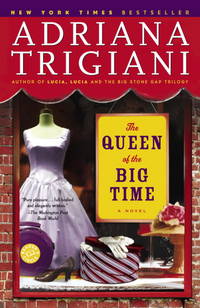 The Queen of the Big Time A Novel

The Queen of the Big Time A Novel

New York U. S. A.: Ballantine Books. As New 2005. Softcover. Marfree, superclean later prtg w/ Conversation with Chetti Marucci + Reading Group; no names, not marked-in, underscored, clearance or discard. Mails from NYC usually within 12 hours. ; 7.8 x 4.9 x 0.7 inches; 304 pages; \nFrom Publishers Weekly Set in early 20th-century smalltown America, Trigiani's fifth novel (after the Big Stone Gap trilogy and Lucia, Lucia) tells a heartfelt but clumsy story of strong women enduring the rigors of farm life and the trials of romantic and familial relations. At its worst, the novel is a morass of incomplete story lines, underdeveloped characters and inconsistent tenses. Still, readers who've fallen for Trigiani's hallmark personages--Italian immigrants living the American dream in rural Pennsylvania--in previous books will delight in meeting these new ones. Nella Castelluca has brains and ambition; she hopes to someday become a teacher. Alas, when her father is injured at work, she must quit school and stay home to help on the family farm. Her first dream slips away, but working farm life turns out to be not so bad, and Nella eventually falls for the dreamy poet Renato Lanzara. But when he skips town, dream two is crushed, and Nella faces a tough reality: marry another man, and move on. Easier said than done, of course, and Trigiani spends the rest of the book drawing out the saga. Although the writing never rises above B-level, the novel does paint a thorough picture of Italian-American family life and the deep pain of lost love. Copyright © Reed Business Information, a division of Reed Elsevier Inc. All rights reserved. --This text refers to an out of print or unavailable edition of this title. From AudioFile There's a lush loveliness at the core of this sweeping tale of America's multicultural heartland. A first-generation Italian-American family in small-town Pennsylvania is depicted against a backdrop of four decades of the past century. The central character, Nella Castelluca, is a farmer's middle daughter whose aspirations are boundless, but her dreams are dashed, and then reborn. Swirling around her are those timeless components of drama--young love, tragic death, and renewed hope. © AudioFile 2004, Portland, Maine .