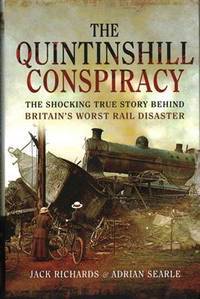 UK,8vo HB+dw/dj,1st thus.[Originally published 2013 and reprinted in 2014 by PEN & SWORD TRANSPORT an imprint of Pen & Sword Books Ltd.,so 1st thus] FINE/FINE.No owner inscrptn and no price-clip (£25.00/ US$ 50.00) to dw/dj.Bright,crisp,clean,matt,colour+b/w photographic illustrated dw/dj,with brown,black and white lettering; with negligible shelf-wear and creasing to edges and corners - no nicks or tears present.Top+fore-edges bright and clean; contents bright,tight,clean, solid and sound - near pristine - no intentional dog-ear reading creases to any pages' corners,but two accidental diagonal creases to bottom corners' of half-title+title pages; otherwise would appear unread - apart from my own collation.Bright,crisp,clean,sharp-cornered,publisher's original plain black cloth boads with bright,crisp,stamped fluorescent red gilt letters to spine/backstrip and immaculate plain white endpapers.UK, 8vo HB+dw/dj,1st edn,ix-xpp+2-267pp [paginated] includes b/w map & diagrams,15 chapters,16pp contemporary+historical b/w photographs in1 block,between p150/1,appendices (I+II),acknowledgements and bibliography and an index; plus [unpaginated] half-title+title pages, contents list/table with dedication to it's recto,a preface,and to the rear; 10pp publisher's b/w illustrated advert for more railway and transport titles. It was the railway's Titanic.A horrific crash involving five trains in which 230 died and 246 were injured,it remains the worst disaster in the long history of Britain's rail network.The location was the isolated signal box at Quintinshill,on the Anglo-Scottish border near Gretna; the date,22 May 1915.Amongst the dead and injured were women and children but most of the casualties were Scottish soldiers on their way to fight in the Gallipoli campaign.Territorials setting off for war on a distant battlefield were to die,not in battle,but on home soil - victims,it was said,of serious incompetence and a shoddy regard for procedure in the signal box, resulting in two signalmen being sent to prison.Startling new evidence reveals that the failures which led to the disaster were far more complex and wide-reaching than signalling negligence.Using previously undisclosed documents,the authors have been able to access official records from the time and have uncovered a highly shocking and controversial truth behind what actually happened aty Quintinshill and the extraordinary attempts to hide the truth. 'The Quintinshill Conspiracy - The Shocking True Story Behind Britain's Worst Rail Disaster' reveals the true events for the first time. Since April 2013,again in March 2015,and in this year too,the UK Post Office has altered it's Pricing in Proportion template,altering it's prices, weight allowances,dimensions and lowered it's qualifying compensation rates too! So,please contact rpaxtonden@blueyonder.co.uk ,because of the weight/value of this item for correct,insured shipping/ P+p quotes - particularly ALL overseas buyers - BEFORE ordering through the order page!

recto
The page on the right side of a book, with the term Verso used to describe the page on the left side.
gilt
The decorative application of gold or gold coloring to a portion of a book on the spine, edges of the text block, or an inlay in...[more]
New
A new book is a book previously not circulated to a buyer. Although a new book is typically free of any faults or defects,...[more]
Cloth
"Cloth-bound" generally refers to a hardcover book with cloth covering the outside of the book covers. The cloth is stretched...[more]
edges
The collective of the top, fore and bottom edges of the text block of the book, being that part of the edges of the pages of a...[more]