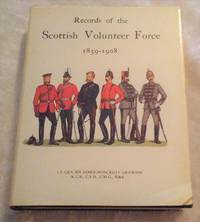 This is a first printing of the facsimile edition of Records of the Scottish Volunteer Force 1859-1908, which was first published in 1909. It is a work on Scottish army uniforms written by the British Army Lieutenant-General Sir James Moncrieff Grierson (1859-1914). It was re-issued in 1972; this is a copy from that printing.

It includes a general account of the origin and history of the military units raised in the dates cited, primarily to serve throughout the empire, from just after the Crimean War into Africa and the Boer War. It includes Light Horse, Mounted Rifles, Artillery, Engineers, and Territorial Regiments such as the Roxburgh and Selkirk, the Berwickshire Volunteers, the Dumfries Volunteer Battalion, the Perthshire, Fifeshire, and Renfrewshire, as well as Rifle Corps, and the Medical Units. The uniqueness of the work, however, is in the color plates which illustrate the uniforms, with as near absolute accuracy as possible. There are 47 beautiful full-color plates, showing both kilted and non-kilted units.

372 pages. Unclipped dust jacket. Owner has signed the front endpaper. Very minor wear to the dust jacket, including darkening of the paper. The book itself has no wear, but two of the plates have come out--they're not missing, they've just come out. So you'll want to take it to a bindery to have that fixed.

jacket
Sometimes used as another term for dust jacket, a protective and often decorative wrapper, usually made of paper which wraps...[more]
facsimile
An exact copy of an original work. In books, it refers to a copy or reproduction, as accurate as possible, of an original...[more]