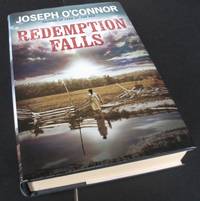 Harvill Secker, 2007. 1st Edition. Hard Cover. Near Fine/Near Fine. Redemption Falls. Joseph O'Connor. Harvill Secker, 2007. First edition, first printing. Hardcover, 457 Near Fine/Near Fine. A very attractive first edition, square, tightly bound, unmarked pages, bright, unclipped jacket, lightest of shelfwear. 1865. The American Civil War is ending. Eighteen years after the famine ship Star of the Sea docked at New York, the daughter of two of her passengers sets out from Baton Rouge, Louisiana, on a walk across a devastated America. Eliza Duane Mooney is searching for a young boy she has not seen in four years, one of the hundred thousand children drawn into the war. His fate has been mysterious and will prove extraordinary. It's a walk that will have consequences for many seemingly unconnected survivors: a love-struck cartographer, a haunted Latina poetess, rebel guerrilla Cole McLaurenson, runaway slave Elizabeth Longstreet and the mercurial revolutionary James Con O'Keeffe, who commanded a brigade of Irish immigrants in the Union Army and is now Governor of a western wilderness where nothing is as it seems. Redemption Falls is a tale of war and forgiveness, of strangers in a strange land, of love put to the ultimate test. Packed with music, balladry, poetry and storytelling, this is a riveting historical novel of urgent contemporary resonance, from the author of the internationally bestselling Star of the Sea. Quantity Available: 1. Category: Fiction; Inventory No: DSCF3247. .

Joseph O’Connor was born in Dublin. He has written ten widely acclaimed and best-selling books including the novels Cowboys and Indians ; Desperadoes ; The Salesman; Inishowen , and most recently Star of the Sea .

Seller rating:
This seller has earned a 5 of 5 Stars rating from Biblio customers.
Biblio.com member since: 2008
Newhaven, East Sussex
Ask Seller a Question

An experienced Online Bookseller, I stock a wide variety of used and out of print books.Areas of interest include art and design,classical music (particularly relating to stringed instruments), exhibition catalogues, modern literature,motoring, sport, philosophy, and more.If you have any questions or queries, please don't hesitate to contact me. Prompt delivery and safe packaging are a priority.

New
A new book is a book previously not circulated to a buyer. Although a new book is typically free of any faults or defects,...[more]
First Edition
In book collecting, the first edition is the earliest published form of a book. A book may have more than one first edition in...[more]
fine
A book in fine condition exhibits no flaws. A fine condition book closely approaches As New condition, but may lack the...[more]
jacket
Sometimes used as another term for dust jacket, a protective and often decorative wrapper, usually made of paper which wraps...[more]
shelfwear
Minor wear resulting from a book being place on, and taken from a bookshelf, especially along the bottom edge.