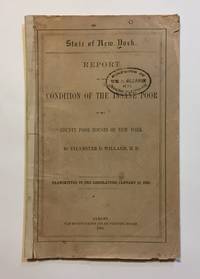 Report on the Condition of the Insane Poor in the County Poor Houses of New York (Series: New York [State] Legislature. Assembly. Doc. no. 19. Transmitted to the Legislature January 13, 1865)

Report on the Condition of the Insane Poor in the County Poor Houses of New York (Series: New York [State] Legislature. Assembly. Doc. no. 19. Transmitted to the Legislature January 13, 1865)

Albany: Charles Van Benthuysen, 1865. First Edition. Fair. 8vo. 70 pp. Original paper wrappers, browned with age-spots throughout, small chips along the edges, large chip on bottom of back wrapper, back wrapper covered in (nonsensical?) mathematical scribbles. On front wrapper a stamp reading "Respects of Wm. H. Gleason, 1865. Member of Assembly." A complete copy in fair condition, priced accordingly. The important "Willard Report," issued at the zenith of the American Civil War, on the often deplorable conditions of the insane poor in institutions throughout New York State. This, the so-called "Willard Report," had a significant impact on improving said conditions, not only in New York but beyond. Sylvester D. Willard, M.D. (1825-1865) was a volunteer surgeon during the Civil War, best known as the founder of the Willard Asylum for the Insane. Shortly after he began his practice, he became connected with the Albany County Medical Society and served successively as its secretary, vice-president, and president. In 1858 he was a delegate to the State Medical Society, and was shortly thereafter appointed its permanent secretary. In the spring of 1862, he went, with two other prominent physicians of Albany, to act as a volunteer surgeon to the Army of the Potomac. At the time of his death he held the positions of Secretary of the State Medical Society, Examining Surgeon for the Pension Office, and Surgeon-General of the State. The conditions plaguing inmates of county poor houses during the 19th century were grim at best, with many "patients" often kept chained and shackled. "By an Act of the New York Legislature, passed on the 30th day of April, 1864, the Secretary of the State Medical Society was authorized to investigate the condition of the insane poor in the various poorhouses, almshouses, insane asylums, and other institutions, where the insane poor are kept." Dr. Willard was called to conduct the investigation, and his culminating report was the instrument that persuaded the New York State Legislature to pass, on April 8, 1865, The Willard Act, authorizing "the establishment of a State asylum for the chronic insane, and for the better care of the insane poor, to be known as The Willard Asylum for the Insane." However, Willard passed away before the Asylum officially opened its doors in 1869. The report contains copies of letters written by Willard along with detailed entries for each county in New York. At the end of the report is a table "showing the summer population of the poor houses, the number of insane, and the number capable of labor in each." William Henry Gleason (1833-1892), to whom this present copy originally belonged, was a minister and politician who served as a Republican member of the New York Assembly from 1864-1865, and as Register in Bankruptcy from 1868-1870. A lawyer by trade, Gleason acquired one of the largest legal practices on Long Island until 1870 when he exchanged the legal for the clerical profession. The printer Van Benthuysen ran an Albany printing house notable for being the first in the United States to successfully apply steam power to the printing press. Van Benthuysen and his sons also managed the Albany Type Foundry (claimed to be the first to apply steam power to producing type) and several branches of a paper-making firm. Charles succeeded to the business in 1845 after his father died; with a new partner named Cornelius Wendell, Van Benthuysen won the bid to print material issued by the United States Senate and House of Representatives.

Ours appears to be the only copy currently on the market.

wrappers
The paper covering on the outside of a paperback.  Also see the entry for pictorial wraps, color illustrated coverings for...[more]
First Edition
In book collecting, the first edition is the earliest published form of a book. A book may have more than one first edition in...[more]
Poor
A book with significant wear and faults. A poor condition book is still a reading copy with the full text still readable. Any...[more]
edges
The collective of the top, fore and bottom edges of the text block of the book, being that part of the edges of the pages of a...[more]
New
A new book is a book previously not circulated to a buyer. Although a new book is typically free of any faults or defects,...[more]
Fair
is a worn book that has complete text pages (including those with maps or plates) but may lack endpapers, half-title, etc....[more]