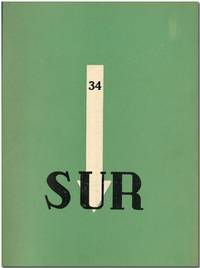 Buenos Aires, 1947. Whole numbers 34 through 74, 95 through 128, and 141 through 158. Bound up in sixteen volumes, wrappers bound in, for James Laughlin. Occasional sunning or dust marking to bindings, occasional text blocks tanned, as usual, but very good or better. Edited by Victoria Ocampo, at various times in association with Jorge Luis Borges, Waldo Frank, Ortega y Gasset, Alfonso Reyes and others. Perhaps the most important Latin American periodical of its times. Eventually 371 numbers were published through 1992 (though many were multiple numbers in later years). Borges was a frequent contributor - as associate editor, as reviewer, and as contributor of original fiction (as well as H. Bustos Domecq); several of his major books appeared under the SUR imprint. Other contributors to SUR during the course of its life included L. Hughes, Huxley, Gropius, Michaux, Masters, Reyes, Heidegger, Maritain, Benda, Mistral, Gide, Breton, Eluard, Berdayev, Malraux, Jimenez, Steinbeck, Amado, G. Greene, J. Stafford, Eliot, Camus, Koestler, Shaw, et al. Significant attention was paid to contemporary writing and film, and to understanding movements, including Surrealism.

G
Good describes the average used and worn book that has all pages or leaves present. Any defects must be noted. (as defined...[more]
wrappers
The paper covering on the outside of a paperback.  Also see the entry for pictorial wraps, color illustrated coverings for...[more]