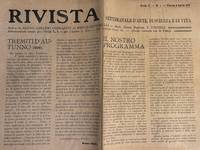 A sequential run of the first six issues of the important and short-lived Futurist serial, out of a total of only 19 issues in 14 fasciscules published, under the direction of noted Futurist figures Bruno Ginanni Corradini and Emilio Settimelli, with contributors including Remo Chiti, Arnaldo Ginanni Corradini, Mario Carli, Luciano Luziani, Enrico Somarè, and Federigo Astumi writing articles on Futurism, poetry, and other prose. Not illustrated. Oblong 8vo., printed on a single sheet of paper. Original self-wrpps., very minor edgewear and chipping to no. 1, scattered toning, overall very good. Florence, 1913. Cammarota, Futurismo, Giornali futuristi n. 15; Salaris, Riviste futuriste, pp. 1090-1097. Corradini (Bruno Corra) had early involvement with the Futurist movement. He and Settimelli co-founded a magazine, Il Centauro, at the end of 1912, and in 1916 he participated in the making of the film Futurist Life, together with Giacomo Balla and F.T. Marinetti. He left Futurism a few years after the end of World War I, publishing novels and creating escapist comedy films.

Settimelli was one of the creators of the idea of Futurist theater, together with Tommaso Marinetti and Corra. Along with Rivista and Il Centauro, he and Corra also co-founded L'Italia futurista, the official journal of the Futurist movement, together with Arnaldo Ginanni-Corradini, Mario Carli, and Remo Chiti.

Incredibly scarce; as of July 2021, OCLC locates only a single holding in Italy of any issues of this journal.

chipping
A defect in which small pieces are missing from the edges; fraying or small pieces of paper missing the edge of a paperback, or... [More]