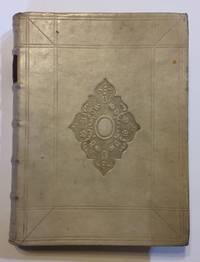 Amsterdam: printed by Janssonio-Waesbergios & Joannem Wolters, 1694. Editio Ultima; First Dutch Edition. 4to. 236 x 184 mm. Pagination: [10], 356, [20] pp. Collation: *4 (-*1, a blank - see below) **2, A-Aaa4 = 202 ff. With an engraved frontispiece by J.F. Greuter, 4 fold-out plates of architectural drawings, and 89 full-page engravings. COMPLETE. Large neo-classical woodcut initials of 10 lines begin each book, in-text woodcut illustrations of mostly coins and medals. Index of figures and subject matter at back. Title page in red and black with engraved title-vignette (see below). Bound in contemporary - no doubt publisher's - ivory Dutch vellum (see below), tooled in blind with large floral lozenge (with the initials of the tool maker "DM" inside) in center of both covers bordered by two sets of double line rolls, five raised bands, red morocco label in second compartment titled in gilt (now faded), unimportant 3mm orange stain near fore-edge of upper cover, corners slightly bumped, endleaves with occasion spotting, hinges with minor scuffing. Edges sprinkled red, top edge a little dusty, small tear in fold-out plate between ff. **2 and A1, light foxing along edges throughout, small water stain at bottom right corner of ff. Ff2-Gg3 (not objectionable). An influential pictorial guide to the ancient buildings and monuments of Rome, our copy preserved in beautiful condition in the original publisher's binding, the elaborate decorative stamp on both covers signed by the engraver "DM" here noticed apparently for the first time. We have observed this same stamp on other copies of the same book, and yet the identify of "DM" has eluded us, for now. This Dutch craftsman merits further research. Donati's landmark work was issued in three editions in Rome before the plates were sold to the Amsterdam publishers Wolters and Janssoons van Waesberge. The spectacular allegorical frontispiece was re-engraved for the present edition by J.F. Greuter after Giovanni Antonio Lelli's original design for the 1638 first edition. So useful was Donati's guide that it was republished throughout the 18th century, a testament to growing topographical studies of antiquity in the early modern era. The four books included in this masterpiece provide a topographical and architectural study of the ancient city of Rome as a reflection of the Roman Empire itself. Donati traces its shape, growth, extent, walls, gates, and roads, and gives a general overview of construction and repair from Romulus to Justinian. The book concludes with a guide to select Christian constructions from Constantine to Sixtus V, followed by a chapter on Donati's general conclusions based on his comparison of ancient Rome and the modern Baroque Rome of Urban VIII. Alessandro Donati (1584-1640), born in Sienna to a noble family, entered the Collegio Romano in 1600 where he resided as a teacher and administrator for most of his life. He joined the Jesuit order in 1617 and quickly became known as an eminent author of books on poetics and Roman history. Two issues of the title-page exist, noted here apparently for the first time. In our copy the vignette is a fine metal engraving of a candle and an inscription found on early Roman graves, "aliis inserviendo consumor" (i.e. "consumed in the service of others"). In the Universidad Complutense de Madrid copy the vignette is a simple woodcut of a bush. The Madrid copy also contains a leaf of instructions to the binder in German, French, and Dutch, and a Priviledge leaf, but not the first folding plate which precedes page 1. Rossetti G-955 (this edition) calls for preliminary gathering *4, apparently recording a blank leaf *1, not present in this copy, which collates exactly as per the digital surrogate at the University of Amsterdam.

raised band(s)
Raised bands refer to the ridges that protrude slightly from the spine on leather bound books.  The bands are created...[more]
edges
The collective of the top, fore and bottom edges of the text block of the book, being that part of the edges of the pages of a...[more]
vignette
A decorative design or illustration placed at the beginning or end of a ...[more]
title page
A page at the front of a book which may contain the title of the book, any subtitles, the authors, contributors, editors, the...[more]
plate
Full page illustration or photograph. Plates are printed separately from the text of the book, and bound in at production. I.e.,...[more]
vellum
Vellum is a sheet of specialty prepared skin of lamb, calf, or goat kid used for binding a book or for printing and writing. ...[more]
fine
A book in fine condition exhibits no flaws. A fine condition book closely approaches As New condition, but may lack the...[more]
morocco
Morocco is a style of leather book binding that is usually made with goatskin, as it is durable and easy to dye. (see also...[more]
gilt
The decorative application of gold or gold coloring to a portion of a book on the spine, edges of the text block, or an inlay in...[more]
First Edition
In book collecting, the first edition is the earliest published form of a book. A book may have more than one first edition in...[more]