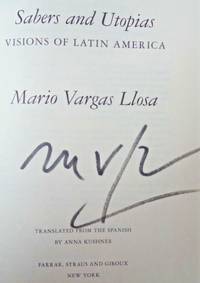 HARDCOVER. SIGNED. Signed in Person at the Book Signing Event. Sabers and Utopias: Visions of Latin America – Essays by Mario Vargas Llosa (2018). Translated from the Spanish by Anna Kushner. SIGNED to the full title page by Mario Vargas Llosa, the author. Brand New and Never owned. This is a FIRST Edition, FIRST Printing copy as stated on the copyright page. Dust jacket is in Brand New condition with no issues. Book has no tears, marks, creases, remainder marks, library markings, or black lines on the edges. Not inscribed to anyone. Not price clipped, not a Book Club Edition (BCE), or signed on a bookplate. True Collectible Quality. First Edition, First Printing, hand SIGNED to the full title page. No inscription; full signature only. From an event featuring Mario Vargas Llosa in conversation with Paul Holdengräber in New York City on May 14, 2018. FREE: The complete six-page, color program is included. This book will be carefully wrapped and shipped via USPS mail with free delivery confirmation. **** Mario Vargas Llosa was awarded the Nobel Prize in Literature in 2010 "for his cartography of structures of power and his trenchant images of the individual's resistance, revolt, and defeat." He has also won the Cervantes Prize, the Spanish-speaking world's most distinguished literary honor. His many works include The Neighborhood, The Discreet Hero, The Feast of the Goat, The Bad Girl, and Aunt Julia and the Scriptwriter. Kushner has translated the novels of Guillermo Rosales, Norberto Fuentes, Gonçalo M. Tavares, and Leonardo Padura. ISBN: 978-0374-2537-38. BS12686.

book club edition
A generic term denoting a book which was produced or distributed by one of any number of book club organizations. Usually the...[more]
inscribed
When a book is described as being inscribed, it indicates that a short note written by the author or a previous owner has...[more]
bookplate
Highly sought after by some collectors, a book plate is an inscribed or decorative device that identifies the owner, or former...[more]
price clipped
When a book is described as price-clipped, it indicates that the portion of the dust jacket flap that has the publisher's...[more]
A.N.
The book is pristine and free of any defects, in the same condition as ...[more]
Copyright page
The page in a book that describes the lineage of that book, typically including the book's author, publisher, date of...[more]
jacket
Sometimes used as another term for dust jacket, a protective and often decorative wrapper, usually made of paper which wraps...[more]
remainder
Book(s) which are sold at a very deep discount to alleviate publisher overstock. Often, though not always, they have a remainder...[more]
edges
The collective of the top, fore and bottom edges of the text block of the book, being that part of the edges of the pages of a...[more]
title page
A page at the front of a book which may contain the title of the book, any subtitles, the authors, contributors, editors, the...[more]
New
A new book is a book previously not circulated to a buyer. Although a new book is typically free of any faults or defects,...[more]
First Edition
In book collecting, the first edition is the earliest published form of a book. A book may have more than one first edition in...[more]