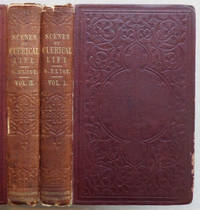 Scenes of Clerical Life is the title under which George Eliot's first published fictional work, a collection of three short stories, was released in book form, and the first of her works to be released under her famous pseudonym. The stories were first published in Blackwood's Magazine over the course of the year 1857, initially anonymously, before being released as a two-volume set by Blackwood and Sons in January 1858.

Terms & Conditions Terms of Sale Everything is returnable if not as described and notice is given promptly on receipt of the goods. However this does not mean that automatically goods are sent out on approval. Any return is entirely the responsibility of the returnee, and the Post Office is the preferred carrier. Our bank account details can be supplied to purchasers. Mastercard, Visa, Solo & Maestro can be accepted for most transactions. Checks are welcome, but please allow 4 working days for them to clear, before we send the book. Payment can be accepted in currencies other than Sterling but please ask beforehand to agree. There are no export restrictions.

CANCELLATIONS & REFUNDS You may request to cancel a book order or return a book within 14 days of receipt of the book. A book may be returned for one of the following reasons: Item damaged: The item was damaged during shipping. Item not as described: The condition of the book does not match the description on Madoc Books. Incorrect item delivered: The title, cover or edition of the book is different than the title on the order. Item not received: The estimated delivery date has passed and the book has still not arrived. To cancel a book order or return a book simply contact Madoc with your order confirmation details and to obtain the return address.

DELIVERY DETAILS We ship all of our orders via Royal Mail. Orders are usually shipped within 2 or 3 business days. Shipping costs are based on books weighing 2.2 LB, or 1 KG. If your book order is heavy or oversized or a multiple in books we will contact you to let you know that extra shipping is required. Insurance costs are usually dictated by the shippers, should they be higher than normal, then we will contact you for your acceptance.

Seller rating:
This seller has earned a 5 of 5 Stars rating from Biblio customers.
Biblio.com member since 2006
Llandudno, Conwy
Ask Seller a Question

We are close to the beach and the wonderful Snowdonia National Park. Dealing in Fine & Rare Antiquarian books in the heart of North Wales. We have a general stock of rare books, which include, but are not limited to: history, topography, private press and items with a Welsh interest.
We are keen to buy similar antiquarian books.

VG
Very Good condition can describe a used book that does show some small signs of wear - but no tears - on either binding or... [More]
edges
The collective of the top, fore and bottom edges of the text block of the book, being that part of the edges of the pages of a... [More]
morocco
Morocco is a style of leather book binding that is usually made with goatskin, as it is durable and easy to dye. (see also... [More]
gilt
The decorative application of gold or gold coloring to a portion of a book on the spine, edges of the text block, or an inlay in... [More]
half title
The blank front page which appears just prior to the title page, and typically contains only the title of the book, although, at... [More]
Marbled boards
... [More]
Cloth
"Cloth-bound" generally refers to a hardcover book with cloth covering the outside of the book covers. The cloth is stretched... [More]