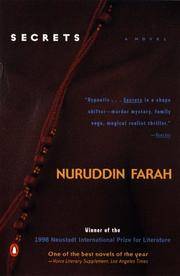 New York U. S. A.: Penguin. Very Good 1999. Softcover. AUTHOR SIGNED TP; lite exterior wear no names, not marked-in, underscored, clearance or discard. Mails from NYC usually within 12 hours. ; 8 x 5.3 x 0.6 inches; 298 pages; \nKirkus Revs\nThis intricate new novel, written in English by Somalian author Farah ("Maps", 1987, etc. ) , was recently awarded the 1998 Neustadt International Prize for Literature. The setting is Mogadiscio on the eve of Somalia's civil war, though the story begins a quarter century earlier in the village where its protagonist, Kalaman, enjoys a childhood blessed by the wisdom of his nurturing grandfather ("Nonno") & the precocious sexual attentions of an older girl, Sholoongo, who is, at various times, his companion, mentor, & tormentor. Then the narrative shifts to the present day. Kalaman, now 33, owns his own computer company, but seems reluctant to marry his girlfriend & father a child, to the frustration of his importunate widowed mother. When Sholoongo returns home from America (where she became famous as a "shape-shifter" & practitioner of magic) , expecting Kalaman to give her a child, the consequent tensions unearth buried "secrets" the several characters have long labored to conceal (which are disclosed in later chapters) The novel is amazingly densely written; its principals' actions, thoughts & emotions are rendered with superb clarity & thoroughness in an enthralling psychodrama that, obedient to Nonno's dictum that "it is in the nature of knots to come undone, & of buried things to be dug up by Time, " reveals the connections drawing together a tale of a vengeful elephant stalking a man, a stolen birth certificate, a "secret marriage, " & other shadowy matters, bringing painfully home to Kalaman the inextricable entwining of the personal & the political. \nOnline Rev. : In Secrets, Farah has conjured a dense tale of betrayal, hidden agendas & tangled relationships that is both a deeply personal story in & of itself & emblematic of the greater problems that continue to tear his country apart today. As a boy, young Kalaman used to creep into the bed of his childhood playmate, Sholoongo, & the two would engage in secret games of sexual discovery. A quarter of a century later, Kalaman is a businessman in Mogadishu on the eve of Somalia's civil war when Sholoongo arrives unexpectedly from America, bringing with her the reminder of an old, half-forgotten promise. The secrets start early: As a child, Kalaman questions even the origins of his own name, wondering if his unusual appellation in a world of Mohammeds & Abdous is an indication that he is not, after all, his father's child. Then there is the question of why his mother seems to dislike Sholoongo, whom his grandfather, Nonno, describes as "a duugan, that is to say, a baby to be buried. " If Kalaman's origins are slightly murky, Sholoongo's are mired in mystery. One version has her abandoned by her mother & raised by lions. Whatever the truth of the girl's history, it is generally agreed by most people in Kalaman's village that she is probably a witch, & therefore trouble. Certainly Kalaman's mother, Damac, mistrusts her, believing her to have "animal powers" & designs on her son. Farah reveals all this in a tantalizing introductory chapter before fast-forwarding 25 years to Mogadishu in the early 1990s, one week before the official outbreak of war; Kalaman, now a successful businessman, comes home to find the long-lost Sholoongo waiting for him. Kalaman's first reaction to his old playmate's reappearance is fear: "There was no way of knowing what her visit might bring forth, what mysteries, what manner of disastrous debates it might generate... From here on out, Farah caroms between past & present, alternating chapters narrated by Kalaman, Damac, Sholoongo, & Nonno as he inexorably unravels a skein of lies, secrets & corruption. As Kalaman learns the truth about himself & his family, that family's destruction mirrors Somalia's hellish descent into sectarian violence & tribal hatreds. Politics, passion, sorcery, & myth are just a few of the threads Nuruddin Farah spins in this remarkable, award-winning novel. --Alix Wilber; Signed by Author .

It is the week before the outbreak of the civil war in Somalia. Kalaman, a successful young businessman in Mogadiscio receives an unexpected house guest—the wild and sexually adventurous Sholoongo, his childhood crush returned from America. She announces that she intends to have his baby. Confronted by this dangerous interruption from his past, Kalaman starts to investigate his family's history, and uncovers the startling key to his own conception. Hailed by Salman Rushdie as "one of the finest contemporary African novelists," Farah writes in a rhythmical, sensual prose reminiscent of García Márquez's best fiction. Evoking the beauty and tragedy of Africa, Secrets is a remarkable portrait of a family disintegrating like its country, its ties dissolved by exposed lies and secrets.