Home Books of the World A Sex Revolution, or Women in the Lead, Waisbrooker's Way to Peace, with an introduction by Pam McAllister 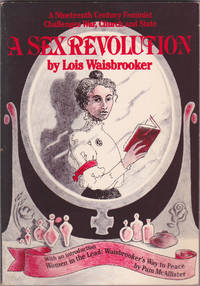 A Sex Revolution, or Women in the Lead, Waisbrooker's Way to Peace, with an introduction by Pam McAllister

A Sex Revolution, or Women in the Lead, Waisbrooker's Way to Peace, with an introduction by Pam McAllister

Here, resurrected, is an 1893 fantasy--at once quaint and alarmingly current--by forgotten suffragist, feminist, and anarchist Lois Waisbrooker in which men agree--reluctantly and under pressure--to change roles with women for fifty years as a social experiment concerned with the ending of all war. The narrator, a "childless widow," falls asleep after reading another feminist novel, The Strike of A Sex; and, stimulated by earlier conversations with her "infidel" old aunt, she dreams of a confrontation between the beautiful Lovella, the embodied spirit of motherhood, and Selferedo, the embodied spirit of the love of power, clad in an officer's uniform. Selferedo's plans for war are foiled when, at Lovella's urging, the wives, mothers, daughters, and sisters of the would-be soldiers vow to go with them to battle. His power fallen to "the power of woman's love," Selferedo turns the country over to Lovella to run for 50 years, just enough time (he thinks) for women to make a thorough mess of things. Men have been too hasty in working wonders of progress, Lovella says, leaving hordes of victims of "the economic system" who march past on cue: wretched prostitutes, unhappy wives, "unwilling" mothers, the poor and unemployed, drunkards. The parade prompts a digression on prohibition--no cure, Lovella argues, for drunkenness, a disease which will be cured only when women have revolutionized society and "the conditions for perfect motherhood are secured." Lovella, indeed, wants "a system of society which will not grind up one portion of its members for the benefit of other portions." And, like any good bureaucrat, she dispatches everyone to study the problem for five years.

good+
A term used to denote a condition a slight grade better than Good.
tight
Used to mean that the binding of a book has not been overly loosened by frequent use.
rubbing
Abrasion or wear to the surface. Usually used in reference to a book's boards or dust-jacket.
remainder mark
Usually an ink marking of some sort which indicates that the book was designated a remainder. In most cases, it can be found on...[more]
trade paperback
Used to indicate any paperback book that is larger than a mass-market paperback and is often more similar in size to a hardcover...[more]
spine
The outer portion of a book which covers the actual binding. The spine usually faces outward when a book is placed on a shelf....[more]
A.N.
The book is pristine and free of any defects, in the same condition as ...[more]
New
A new book is a book previously not circulated to a buyer. Although a new book is typically free of any faults or defects,...[more]
Poor
A book with significant wear and faults. A poor condition book is still a reading copy with the full text still readable. Any...[more]