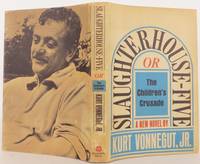 Slaughterhouse-Five, or The Children's Crusade: A Duty-Dance with Death is a satirical novel by Kurt Vonnegut and is generally recognized as his most influential and popular work. Set around World War II, the novels tells of the story of Billy Pilgrim, a chaplain’s assistant, and his experiences and journeys through time. Billy sees when, how, and why he will die, resulting in his becoming fatalistic. The refrain “so it goes” is used when death, dying, and mortality occur and it appears in the book 106 times. Additionally, the novel can be read as semi-autobiographical: Vonnegut was present during the firebombing of Dresden, a central event in the novel. Shortly after publication, Slaughterhouse-Five was nominated for two best novel recognitions, a Nebula Award and a Hugo Award, though it lost both to Ursula K. Le Guin’s The Left Hand of Darkness. The Modern Library ranked Slaughterhouse-Five eighteenth on its list of the “100 Best” English-language novels of the 20th century in 1998. It is also listed in TIME’s “100 Best Novels” (since 1923). However, mainly due to its irreverent tone and obscene content, Slaughterhouse-Five has been the subject of many attempts at censorship. The novel treats one of the most horrific massacres in European history—the firebombing of Dresden—with mock-serious humor and clear antiwar sentiment. It also depicts sexuality to a revolutionary extent as one of the first literary acknowledgments that homosexual men, referred to in the novel as “fairies,” were among the victims of the Nazi Holocaust. Thus, Slaughterhouse-Five is listed in the American Library Association's list of the “Most Frequently Challenged Books of 1990–1999” as well as the ALA's “Most Frequently Challenged Books of 2000–2009.”  The novel has been adapted more than a handful of times, most notably a film adaptation by the same name made in 1972. Although the film did poorly in the box office, it was critically praised, winning the Prix du Jury at the 1972 Cannes Film Festival.

I very much enjoyed this novel. It was my first Vonnegut book, and have since ordered others.I felt it a very well written novel, with a great story, however made a horrible movie.

Seller rating:
This seller has earned a 2 of 5 Stars rating from Biblio customers.
Biblio.com member since: 2009
Beverly Hills, California
Ask Seller a Question

fine
A book in fine condition exhibits no flaws. A fine condition book closely approaches As New condition, but may lack the...[more]
First Edition
In book collecting, the first edition is the earliest published form of a book. A book may have more than one first edition in...[more]
jacket
Sometimes used as another term for dust jacket, a protective and often decorative wrapper, usually made of paper which wraps...[more]