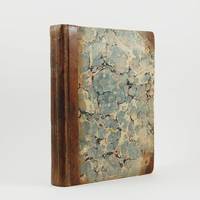 A student's manuscript of mathematical problems from A Treatise on Plane and Spherical Trigonometry as well as Andrew MacKay's The Theory and Practice of Finding the Longitude at Sea or Land.

A student's manuscript of mathematical problems from A Treatise on Plane and Spherical Trigonometry as well as Andrew MacKay's The Theory and Practice of Finding the Longitude at Sea or Land.

Hardcover. Very Good. 4to - over 9¾ - 12" tall. 170 page manuscript. Contemporary half speckled sheep, marbled sides. Several contemporary sheets of manuscript with mathematical notations loosely inserted. Corners repaired, a little wear and some discolouration to boards, endpapers tanned, contents with the occasional light spot but overall quite clean. Very good condition. An elegant, substantial early-19th century manuscript containing practical mathematical and astronomical problems likely produced by a student of navigation.The majority of the text is from John Bonnycastle''s A Treatise on Plane and Spherical Trigonometry, originally published in 1806. Bonnycastle was a respected mathematics teacher who tutored the children of the aristocracy and taught at the Royal Military Academy in Woolwich. A man of "considerable classical and general literary culture", he was a great friend of Fuseli and also of Leigh Hunt, who included Bonnycastle in his book Lord Byron and Some of His Contemporaries. "Bonnycastle was a prolific and successful writer of textbooks. Of his chief works, The Scholar's Guide to Arithmetic first appeared in 1780 and ran to an eighteenth edition in 1851. His Introduction to Astronomy (1786), intended as a popular introduction to astronomy rather than as an elementary treatise, was one of the best-selling books on the subject for many years. Besides elementary mathematical books, Bonnycastle was in early life a frequent contributor to the London Magazine. He also wrote the introduction to a translation (by T. O. Churchill) of Bossut's Histoire des mathématiques (1803) and a 'chronological table of the most eminent mathematicians from the earliest times' for the end of the book" (ODNB). This manuscript, titled "Bonnycastle's Trigonometry", contains the practical portions of the text, including rules for solving different types of trigonometric problems ("cases") and practice problems. The practice problems have been completed in full, including large, precise geometrical diagrams made with ruler and compass. Page numbers are given and the problems are dated, the first section having been completed on September 24th, 1813 with additions every few days until the final dated entry on March 31, 1814. The final, undated portion, about a quarter of the manuscript, comprises "Miscellaneous Astronomical Problems" from Andrew Mackay's The Theory and Practice of Finding the Longitude at Sea or Land (first published in 1793, the second edition in 1801), an important work for which its author "received the thanks of the boards of longitude of England and France" (ODNB). This manuscript's focus on mathematical rules and practice problems (at the expense of the more theoretical, text-heavy portions), together with the fact that it was updated regularly between September and March, indicates that it was produced by an advanced student working through the book as part of a regular course of study. The script is elegant, clear, and controlled throughout, and pencilled guide rules indicate that the student took great pains to ensure the manuscript was attractive and readable, suggesting that it was evaluated as part of coursework rather than used as a notebook for producing rough calculations (indeed, some rough calculations are included on sheets of scrap paper loosely inserted). Mathematics of this type, focused on spherical trigonometry, astronomy, and navigational problems, would have been of interest primarily to mariners, and it seems reasonable to conclude that the student was attending a naval or military institution, or was perhaps under private tutelage with a naval career in mind. A beautiful example of a student's efforts at practical mathematics for navigation at a time when Britain was the major power on the seas.

Seller rating:
This seller has earned a 5 of 5 Stars rating from Biblio customers.
Biblio.com member since 2018
Aberlour, Moray
Ask Seller a Question