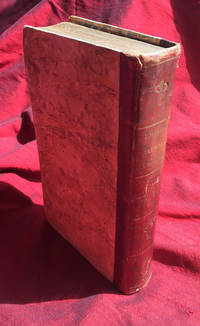 Louvain, 1827. Hardcover. Very good. Dates: 1827-1829. 8vo. [2], 7, [12], 19-167; 147, 150-302 pp. (pagination skipped presumably due to a scribal error, resulting in the loss of one page of text?) + [15] pp. additional notes. Contemporary quarter morocco over recently renewed marbled boards, brilliantly executed in the antique style. Light dampstaining and light chipping to fore-edges of fly-leaves and several leaves at beginning (including title-page) and at end. WATERMARK: monogram "V D L" (doubtless Van der Ley family of papermakers, Zaanstreek, The Netherlands); countermark of a "palmette" or "shell" similar to Churchill 195. Manuscript of lost, unpublished lectures on Surgical Pathology by esteemed Louvain professor of medicine Jean-Marie Baud (1776-1852), a Professor of Medicine at the University of Louvain (1821-1830) and the Catholic University of Louvain until 1850. The scribe is named in the manuscript: Jacques Bernard Maassen, formerly one of Baud's students (see below).

After describing Baud's distinguished career at length, Adolphe Quetelet, writing in the Biographie Nationale (Brussels, 1866, vol. I, cols. 781-785) states that of all Baud's writings, the unpublished lectures on Surgical Pathology "remain his most important. The manuscript exists in its entirety, but his last illness, it is said, did not give him time to revise the text, and the publication could not take place. Rather, we believe that, yielding to exaggerated scruples, he would not allow the impression of it." Quetelet would have been well positioned to know of the existence of the MS lectures, and would have been able to comment on their importance, having been Baud's close friend and colleague for nearly 40 years.

The present volume may be a copy of the manuscript cited by Quetelet, but in any event the parent MS does not seem to have survived. The text herein exhibits few corrections, although there are a number of marginal notes throughout, and the hastily written text of the last 15 unnumbered pages suggests that it was not copied from any other source. The present MS was written in two distinct parts, the second beginning oddly at "Sectio Quinta: De Fistulis" yet the first part is not arranged into four sections as one would expect; furthermore, the second part has a different format, most easily recognized by the page numbers (top center vs. top right) although the signatures of the gatherings are continuous. One possible explanation is that the present MS was made from an incomplete archetype, or that the scribe (one of Baud's students, Jacques-Bernard Maassen, whose Dissertation on Arthritis was accepted at Utrecht in 1832) was interested in certain subjects. In any event, this MS is the only surviving and therefore most complete record of Baud's Surgical Pathology lectures in existence.

Baud started his medical career as a military doctor with the French Revolutionary army, and was eventually nominated as professor of Medicine at the University of Louvain after the abdication of Napoleon, his military commander-in-chief for many years. Baud's courses on Surgical Pathology had great impact in the Medical School of the Catholic University of Louvain, and greatly influenced a number of distinguished students, including Pierre-Jean Haan. In 1840, after Baud's health declined, Haan co-taught the courses, continuing until Baud's retirement in 1849, at which time Haan succeeded him.

We have located three MSS by Baud that are clearly independent from ours: the first, likewise on Surgery but written at least 30 years earlier than the one here under consideration (and consisting of only 250 pp.) is at the University of Ghent. The other two, both of which are entitled "Cours de nosographie chirurgicale" (2 vols.) are KU Leuven Centrale Bibliotheek and Wellcome (see Moorat, Catalogue of Western MSS). Further literature: Inga Fourneau, "Jean Marie Baud (1776-1852). Professor at the Faculty of Medicine in Two Consecutive Universities of Louvain" in: Acta Chir Belg. 2013 Sep.-Oct. 113(5) pp. 378-83.

leaves
Very generally, "leaves" refers to the pages of a book, as in the common phrase, "loose-leaf pages." A leaf is a single sheet...[more]
Marbled boards
...[more]
morocco
Morocco is a style of leather book binding that is usually made with goatskin, as it is durable and easy to dye. (see also...[more]
Gatherings
A term used in bookbinding, where a gathering of sheets is folded at the middle, then bound into the binding together. The...[more]
chipping
A defect in which small pieces are missing from the edges; fraying or small pieces of paper missing the edge of a paperback, or...[more]