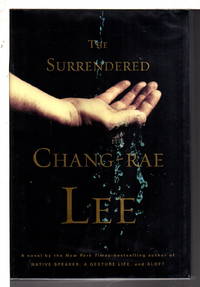 New York:: Riverhead Books,, 2010.. Fine in fine dust jacket.. First printing. The author's fourth novel, one inspired by his father's stories of attempting to flee the war in Korea - but Lee states it is "is not so much a war novel as it is a story concerned with the effects of mass conflict on the human psyche and spirit, the private odysseys that those who have experienced conflict must endure." INSCRIBED on the title page. 469 pp.

The bestselling, award-winning writer of Native Speaker, A Gesture Life, and Aloft returns with his biggest, most ambitious novel yet: a spellbinding story of how love and war echo through an entire lifetime. With his three critically acclaimed novels, Chang-rae Lee has established himself as one of the most talented writers of contemporary literary fiction. Now, with The Surrendered, Lee has created a book that amplifies everything we've seen in his previous works, and reads like nothing else. It is a brilliant, haunting, heartbreaking story about how love and war inalterably change the lives of those they touch.June Han was only a girl when the Korean War left her orphaned; Hector Brennan was a young GI who fled the petty tragedies of his small town to serve his country. When the war ended, their lives collided at a Korean orphanage where they vied for the attentions of Sylvie Tanner, the beautiful yet deeply damaged missionary wife whose elusive love seemed to transform everything. Thirty years later and on the other side of the world, June and Hector are reunited in a plot that will force them to come to terms with the mysterious secrets of their past, and the shocking acts of love and violence that bind them together.As Lee unfurls the stunning story of June, Hector, and Sylvie, he weaves a profound meditation on the nature of heroism and sacrifice, the power of love, and the possibilities for mercy, salvation, and surrendering oneself to another. Combining the complex themes of identity and belonging of Native Speaker and A Gesture Life with the broad range, energy, and pure storytelling gifts of Aloft, Chang-rae Lee has delivered his most ambitious, exciting, and unforgettable work yet. It is a mesmeriz­ing novel, elegantly suspenseful and deeply affecting.

Do not hesitate to call us at 1-209-274-6960 or email us at chris@bookfever.com if you have any questions or want to confirm availability. FREE gift wrapping upon request. Books are packed carefully, shipped promptly with delivery confirmation and insurance at our expense. We want our customers to be totally satisfied with their purchase and guarantee all of our books to be as described. If for any reason you want to return a book, please contact us within 10 days of receipt of the book. Returned books must be in the same condition as we shipped to you. Reciprocal trade courtesies offered, institutions may request to be invoiced. WANT lists welcomed; we have assisted many collectors and scholars in acquiring books in their area of interest.

Seller rating:
This seller has earned a 5 of 5 Stars rating from Biblio customers.
Biblio.com member since: 2003
Ione, California
Ask Seller a Question

This is our 28th year in business. We started selling books in the CompuServe Book Collecting forum in 1993, quite a while before there was any commercial Internet. In 1998 we relocated our main business from Sacramento to the Sierra foothills of Amador County, about 35 miles east of downtown Sacramento and opened a store (called Books Upstairs) at the Antiques Upstairs Mall, 5 Main Street, Jackson, CA. (open every day from 10-5) The emphasis there is on Western Americana, children's books, mysteries, science fiction, and inexpensive reading copies of classics and vintage juvenile series. Please let us know if there are any other books you are looking for; we enjoy helping collectors complete their collection and we can often suggest books for reading! .

jacket
Sometimes used as another term for dust jacket, a protective and often decorative wrapper, usually made of paper which wraps...[more]
title page
A page at the front of a book which may contain the title of the book, any subtitles, the authors, contributors, editors, the...[more]
fine
A book in fine condition exhibits no flaws. A fine condition book closely approaches As New condition, but may lack the...[more]
inscribed
When a book is described as being inscribed, it indicates that a short note written by the author or a previous owner has...[more]