Home Modern Rare TAKE ME HOME: PHOTOGRAPHS FROM THE HEARTLAND TO THE COASTS 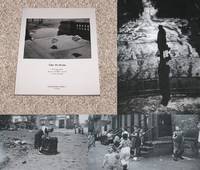 TAKE ME HOME: PHOTOGRAPHS FROM THE HEARTLAND TO THE COASTS

TAKE ME HOME: PHOTOGRAPHS FROM THE HEARTLAND TO THE COASTS

Chicago, IL: Stephen Daiter Gallery, 2012. First Edition. First Printing.. Softcover. As New/No Dust Jacket, As Issued.. Chicago, IL: Stephen Daiter Gallery, 2012. Softcover. As New/None, As Issued. First Edition/First Printing. 83 pages. Exhibition Catalog. The first and only edition. Published in a small and limited print run as a softcover original only. None of the copies was sold to the public. There is no ISBN. The Exhibition Catalog is now rare. A brilliant production by Adam Holtzman: Regular-sized volume format. Pictorial softcovers with titles on the cover and spine, as issued. Photographs by various contributors, a Who's Who of 20th-century American photography. Except for the Introduction by Stephen Daiter and accompanying Captions, there is no text. Printed on pristine-white, thick coated stock paper in the United States to the highest standards. Without DJ, as issued. Published on the occasion of the AIPAD Photography Show held in New York in 2012. Presents "Take Me Home: Photographs From The Heartland To The Coasts". Rich, beautiful, and representative selections from the three major schools of American photography, identified as such by geographic location: The Photo League (New York) , the Institute of Design (Chicago) , and the West Coast School (California) . In sum, THE photographic achievement of the American century, in a "time capsule" catalog that showcases now-iconic work by such New York figures as Lewis Hine, Morris Engel, and Weegee; Chicago legends Harry Callahan, Yasuhiro Ishimoto, Kenneth Josephson, Ray K. Metzker, Aaron Siskind, and Charles Swedlund; and California "dreamers" such as Ansel Adams, Wynn Bullock, Imogen Cunningham, and Edward Weston. Intentionally or not, their various imagery does vividly evoke a specific place in which the photograph was either taken or made. An absolute "must-have" title for art photography collectors. <b><i> This title is a contemporary art photography classic. As far as we know, this is the only copy of the Exhibition Catalog available online and is in especially fine condition: Clean, crisp, and bright, a pristine beauty. A rare copy thus. </b></i>Lavishly illustrated with tonally rich reproductions from vintage photographs. Some of the greatest photographers of the 20th century. A fine copy. (SEE ALSO OTHER STEPHEN DAITER TITLES IN OUR CATALOG).

First Edition
In book collecting, the first edition is the earliest published form of a book. A book may have more than one first edition in...[more]
New
A new book is a book previously not circulated to a buyer. Although a new book is typically free of any faults or defects,...[more]
crisp
A term often used to indicate a book's new-like condition. Indicates that the hinges are not loosened. A book described as crisp...[more]
spine
The outer portion of a book which covers the actual binding. The spine usually faces outward when a book is placed on a shelf....[more]
fine
A book in fine condition exhibits no flaws. A fine condition book closely approaches As New condition, but may lack the...[more]
jacket
Sometimes used as another term for dust jacket, a protective and often decorative wrapper, usually made of paper which wraps...[more]